Harley Quinn (AKA Dr. Harleen Quinzel) is the bubbly yet sadistic accomplice and partner to the Joker in the DC comics universe. Harley’s relationship with the Joker can best be described with an “it’s complicated” status on Facebook. Harley first entered Batman’s rogues gallery in Batman: The Animated Series but has recently gained even more popularity with Margot Robbie’s portrayal of the character in Suicide Squad alongside Jared Leto’s take on the Joker. In Suicide Squad, Harley Quinn utilizes a punk aesthetic which pairs nicely with her puddin’s goth chic.

To learn how to make your own DIY Harley Quinn costume from Suicide Squad, see below: 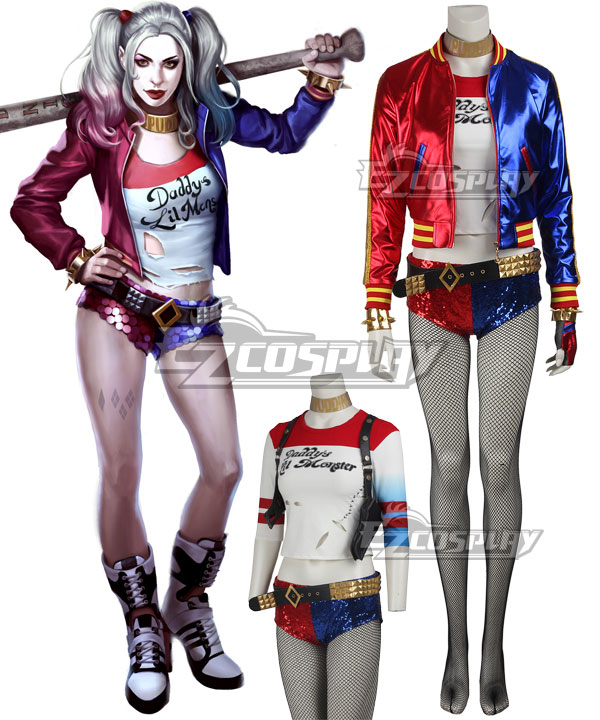 How to Dress Like Harley Quinn in Suicide Squad

Harley has bleached blonde hair which she wears in pigtails. Each pigtail is dyed at the tips with some Manic Panic – one hot pink and the other bright blue.

Harley’s face is covered in white foundation or face paint which mirrors the pallid look of her puddin’. She also wears smeared hot pink and bright blue mascara around her eyes to match the coloration of her pigtails. Harley has a black heart tattooed on her cheek just below her eye. She also wears bright red lipstick which is often smeared.

Harley wears a red and white long-sleeved raglan shirt which is emblazoned with the phrase “Daddy’s Lil Monster’ across the front. The shirt is very worn and has several cuts and tears throughout. She sometimes wears a a shiny vinyl blue and red baseball-style jacket over the shirt. “Property of the Joker” is written in gold letters across the back.

Harley’s shoes are truly unique. They appear to be a cross between a high-heel boot, athletic shoes and shin guards. The boots feature high heels on a white and black ADIDAS shoe with shoe laces and velcro. The boot extends past her shins and is laced up all the way to the top.

Harley loves to accessorize! She wears a gold-plated choker that is in the shape of the word “PUDDIN”. She also wears a pair of leather cuff bracelets with gold spikes jutting out of them and one red and blue baseball glove which appears to be made out of a similar material as her shiny vinyl jacket. Harley also wears a black leather belt with gold studs and a diamond-shaped buckle.

Harley Quinn’s iconic weapon from Suicide Squad is a brown wooden baseball bat with the words “Good Night” prominently drawn in red marker. There is also a poem or note scrawled across the bat in black marker. There is white grip tape around the handle and a red and blue diamond checkered designed drawn just above the grip tape.

Harley Quinn is shown wearing a black and gold cocktail dress while attending a night club with the Joker. It is a low-cut dress with spaghetti straps and features a diamond checkered design in gold and black.

I’m bored. Play with me.