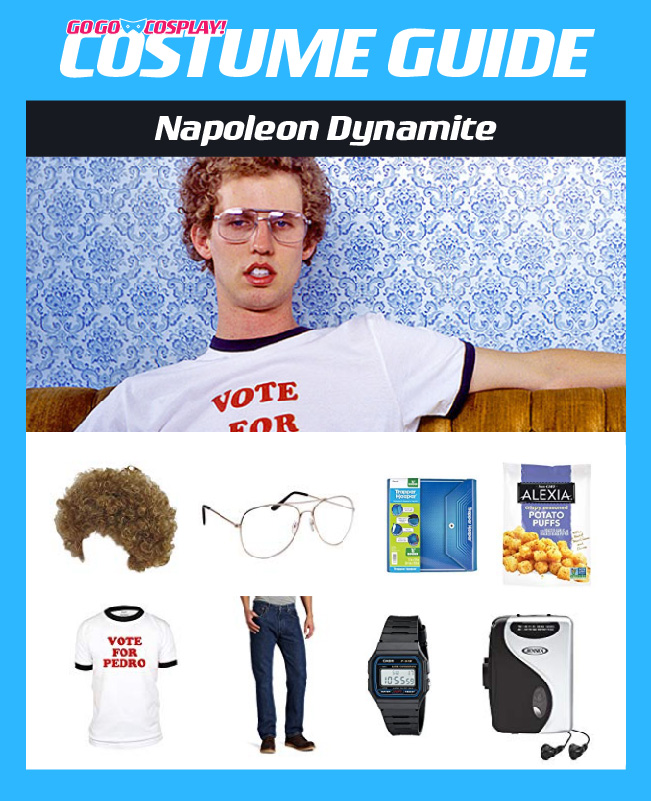 Living in his colorful but dull suburban town, Napoleon Dynamite’s life mostly consists of the ups and downs of high school, dealing with his wacky mom, brother and uncle, making friends with Pedro (an unpopular student from Mexico who Napoleon helps to get status as class president) and even finding time for a little romance on the side!

Check out the links below to make your own DIY Napoleon Dynamite costume for cosplay or Halloween.

Napoleon isn’t big on style and sports an unkempt orange permed hairstyle. To nail down this hairstyle for your costume, you can either dye and style your own hair in the same retro up-do, or you can buy a wig from any online costume website or Halloween store. Look for one with the same curly orange locks as Napoleon’s.

Napoleon Dynamite wears basic blue jeans, which you can purchase from any online retail website or clothing shop.
What truly makes this character stand out is his selection of t-shirts, most notably his white t-shirt with a black collar and sleeve cuffs, as well as red text on the front which reads, “vote for Pedro”, which he wore with pride when supporting his best friend in the school election.

You can search online for a Napoleon Dynamite Vote For Pedro t-shirt to order, or you can make one yourself using a blank white t-shirt and red fabric paint.

Large rimmed glasses are among Napoleon’s most recognizable wardrobe items. Purchase a pair of glasses in his iconic style.

To really seal the deal and make your costume authentic, you’ll need a pair of fake rubber teeth just like Napoleon’s crooked overbite. You can purchase fake costume teeth from most online Halloween stores, party supply stores and retail wholesalers.

“Napoleon, give me some of your tots!”

This is perhaps the most famous quote from the film that fans still joke about, and to give your costume an extra kick, put some tater tots in your pocket just like Napoleon! Use any brand of tater tots and see if your friends can guess the hilarious reference when you show up at your next cosplay convention – and remember, don’t forget to vote for Pedro while you’re there!