Star Wars is an iconic series going back decades, so it’s no surprise it’s gained millions of devoted fans worldwide. Many enjoy portraying their favorite characters as cosplayers, and we’ve rounded up some of the best we could find in this article.

Each section is given over to a particular character, and we’ve added some information about how to dress, just like the cosplayers in the photos. To get the most authentic results, you can make your own outfits. But this is often impractical, and it’s much easier to buy online, especially if you’ll only wear the costume a couple of times.

If you want to cosplay one character in particular, you can press Ctrl+F and search for their name in our article. Then you can read the corresponding section and discover all you need to know. We’ve kept our explanations simple and provided relevant links to save time.

We recommend ensuring you always do sufficient research before buying any of the featured costumes. You can find customer reviews and product details by following our links. You can also see whether the cosplayers we highlight have worn their costume at multiple events and whether there are additional photos or videos.

As Darth Vader’s grandson, Kylo Ren has a notorious reputation. Cosplaying him is pretty simple. He wears an all-black outfit, including shoes, pants, hooded cape, and belt. It’s simplest to buy them all-in-one.

Here’s an example from Fenix Cosplay via SimCosplay: 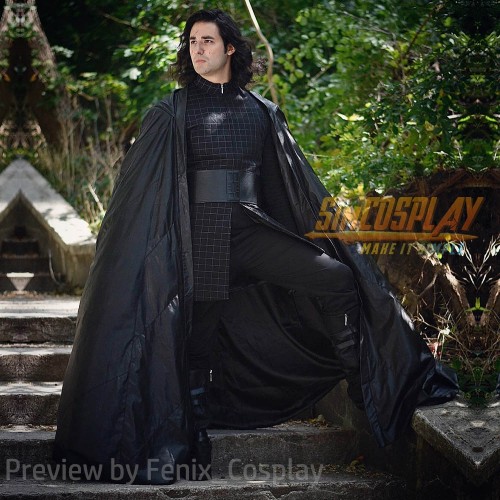 This costume mimics the above quite well. If you need more help, consult a Kylo Ren costume guide. 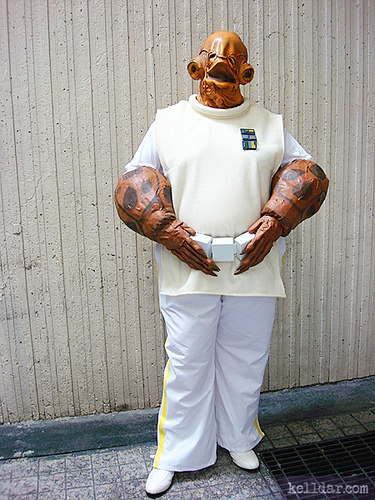 If you’d like to know more about how to get the pieces for this costume, you can read this Admiral Ackbar costume guide.

Rogue One: A Star Wars Story was a stand-alone film in the space opera format released in 2016. Its main protagonist is Jyn Erso.

Her costume is quite complex, featuring a lot of accessories. These include a gilet with pockets, gloves, and a scarf. Cosplayer Desert Chica wears it well. 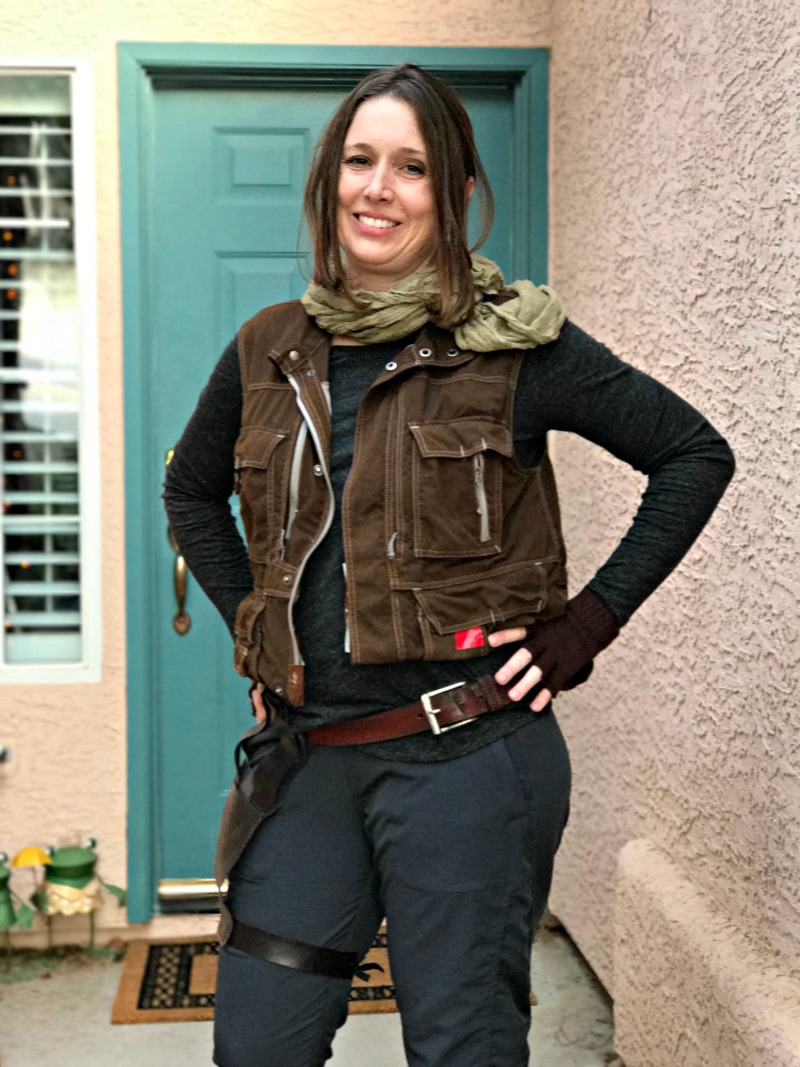 We found a similar all-in-one Jyn Erso costume you can buy. There’s also a costume guide you can refer to for more details. If you feel confident, you can also submit your cosplay to a showcase.

These unmistakable aliens first appeared in Star Wars: A New Hope and have proven unforgettable. Below is a remade costume from Sheila Echols-Smesny. 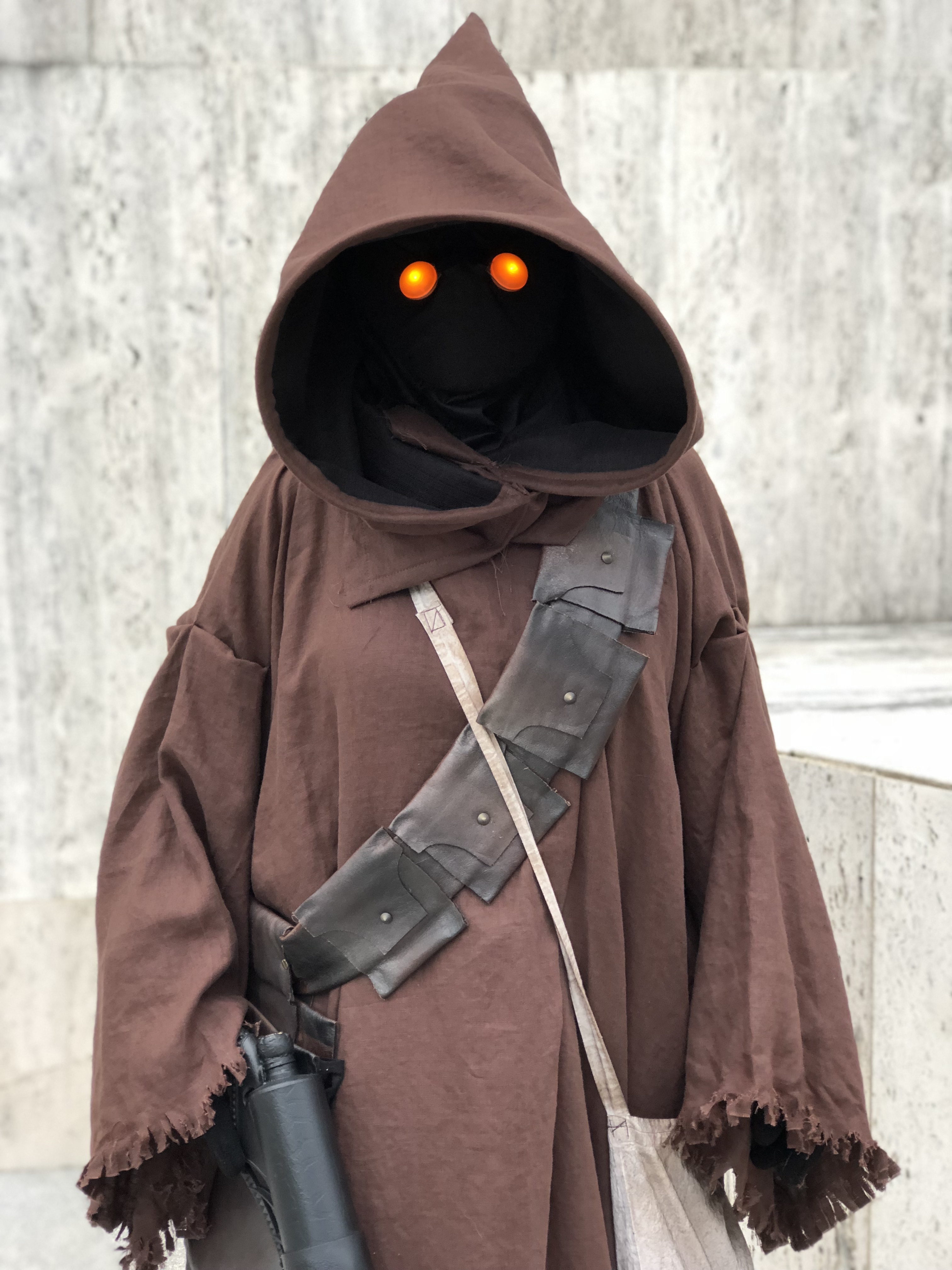 You can buy a similar costume here. We’ve also got a Jawa costume guide to help you faithfully portray a Jawa in your cosplay efforts.

First appearing as the main protagonist in Star Wars: The Force Awakens in 2015, Rey has become instantly recognizable to Star Wars fans worldwide.

Her costume includes a white top, elastic knee-length pants, detached sleeves, and a belt with a pouch. Brown boots complete the look. Cosplayer Svatii has created a good look with this costume. 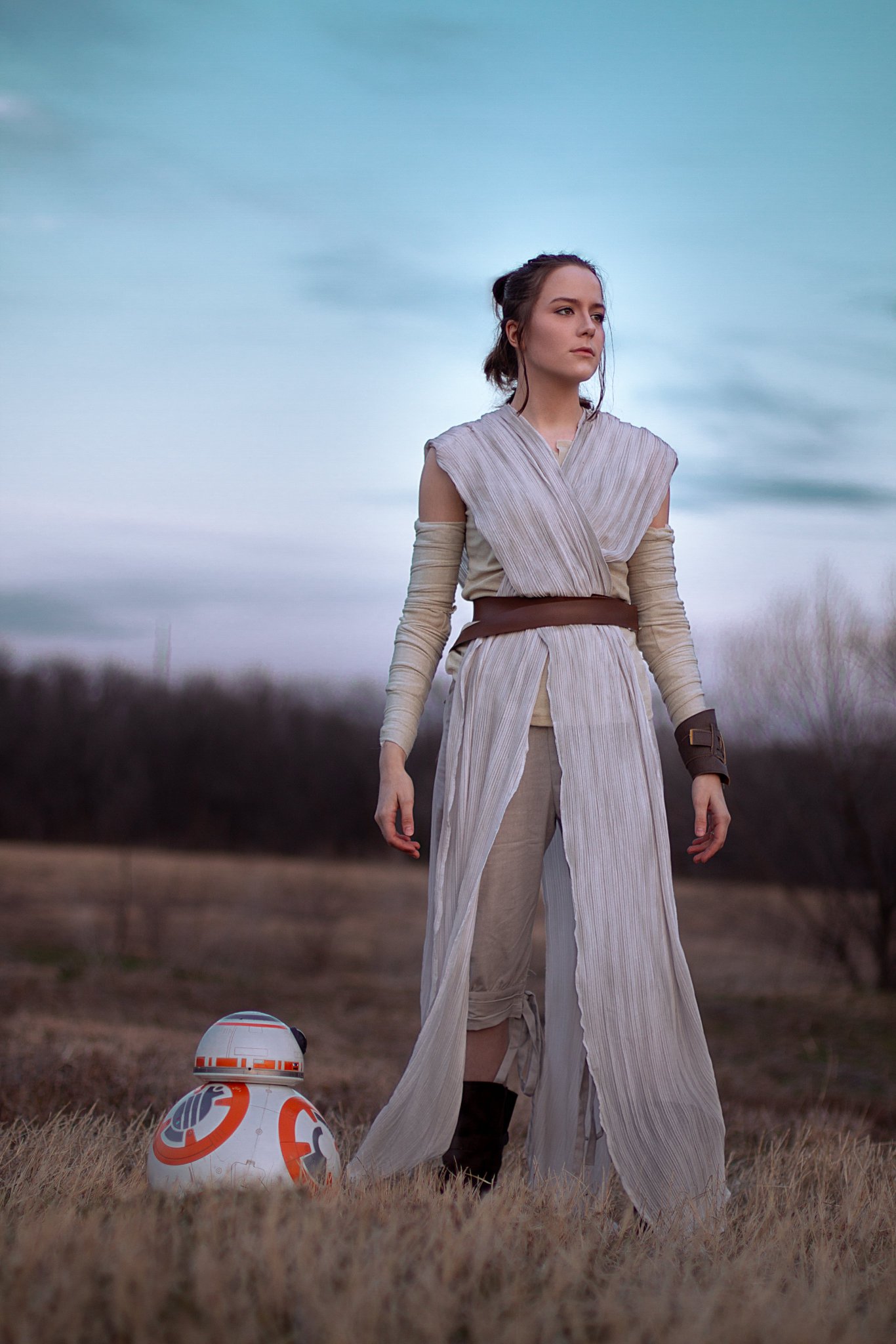 If you’d like to get a hold of this outfit, a good version is available here. You can also read a Rey costume guide if you need some extra advice.

Darth Nihilus was a Dark Lord of the Sith who reigned during the Jedi Civil War, commonly known as the Lord of Hunger.

The most important elements of the costume are the unique mask, black balaclava, gloves, boots, and robe. Gretchen Winkler captures the look perfectly. 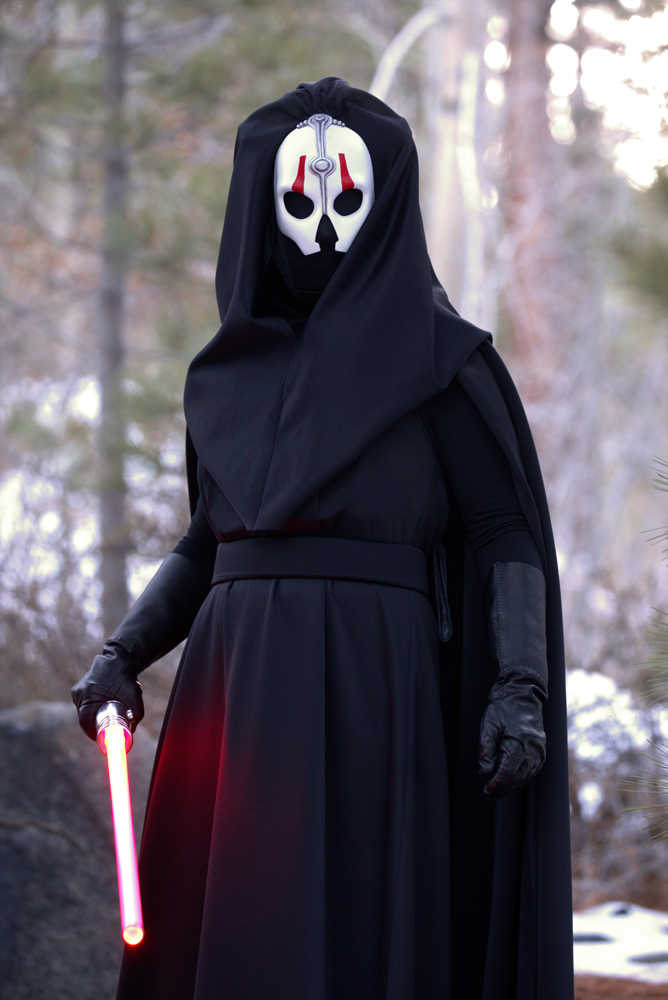 If this costume inspires you, you can consult a Darth Nihilus costume guide for additional information. We also found an excellent outfit to serve as a foundation for creating this outfit.

One of the most memorable outfits from the Star Wars franchise is the one worn by Princess Leia as a slave.

Cosplayer Candy Keane‘s version was famously worn by actress Kristen Bell, shown in the picture below. 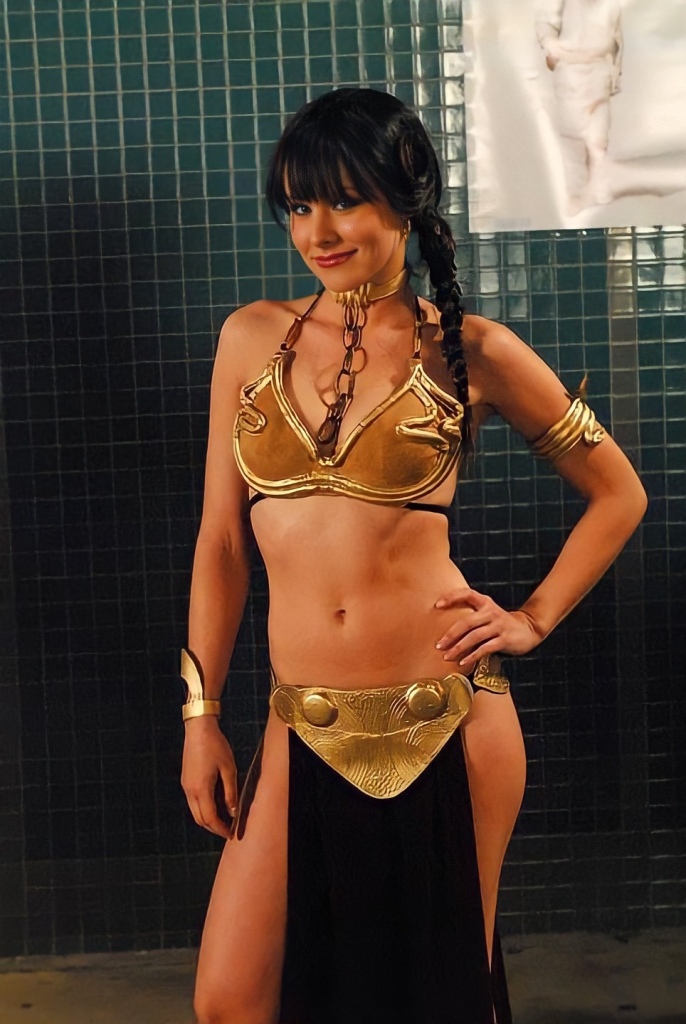 If you’d like to mimic Kristen’s look, you can refer to a Slave Leia costume guide for more details. The closest all-in-one costume we could find is available here.

Poe Dameron is a commander in the Starfighter Corps and has the total trust of Leia Organa. He’s a popular choice for fans to cosplay. He wears an orange jumpsuit with a white vest and braces over the top.

Zam and Jek Creations have portrayed him well in the cosplay photo below. 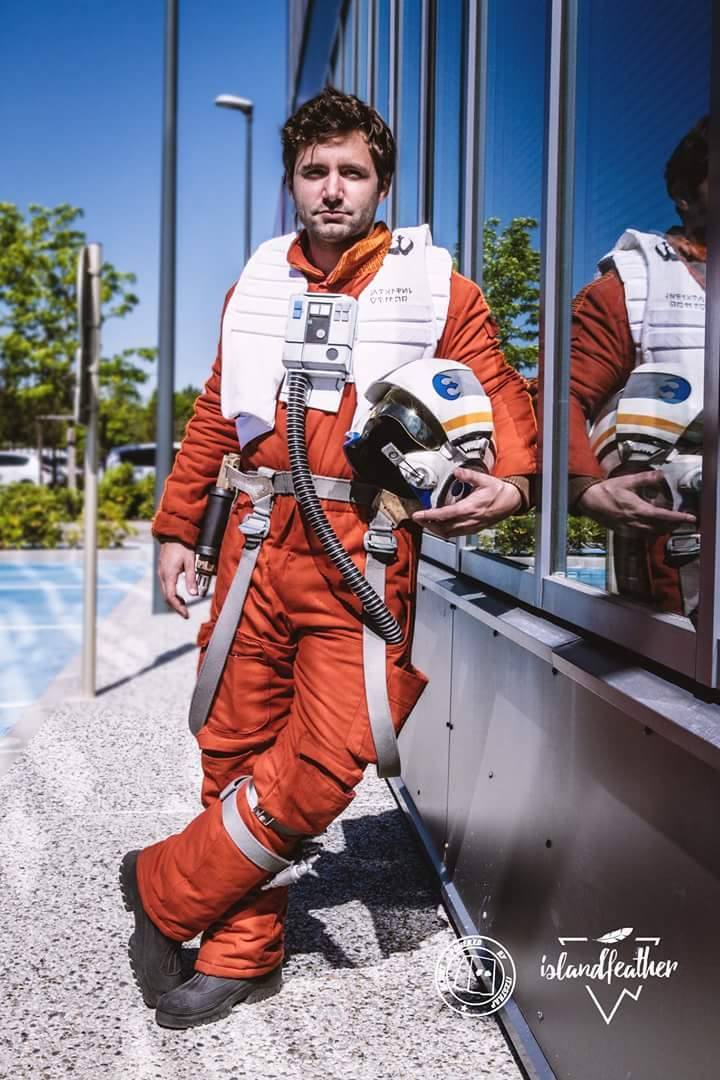 If Poe Dameron is a cosplay you’d like to do, you can get his costume here and check out a Poe Dameron costume guide for additional tips and advice.

Rose Tico helps keep the Resistance starfighters in the air and hates the First Order passionately. 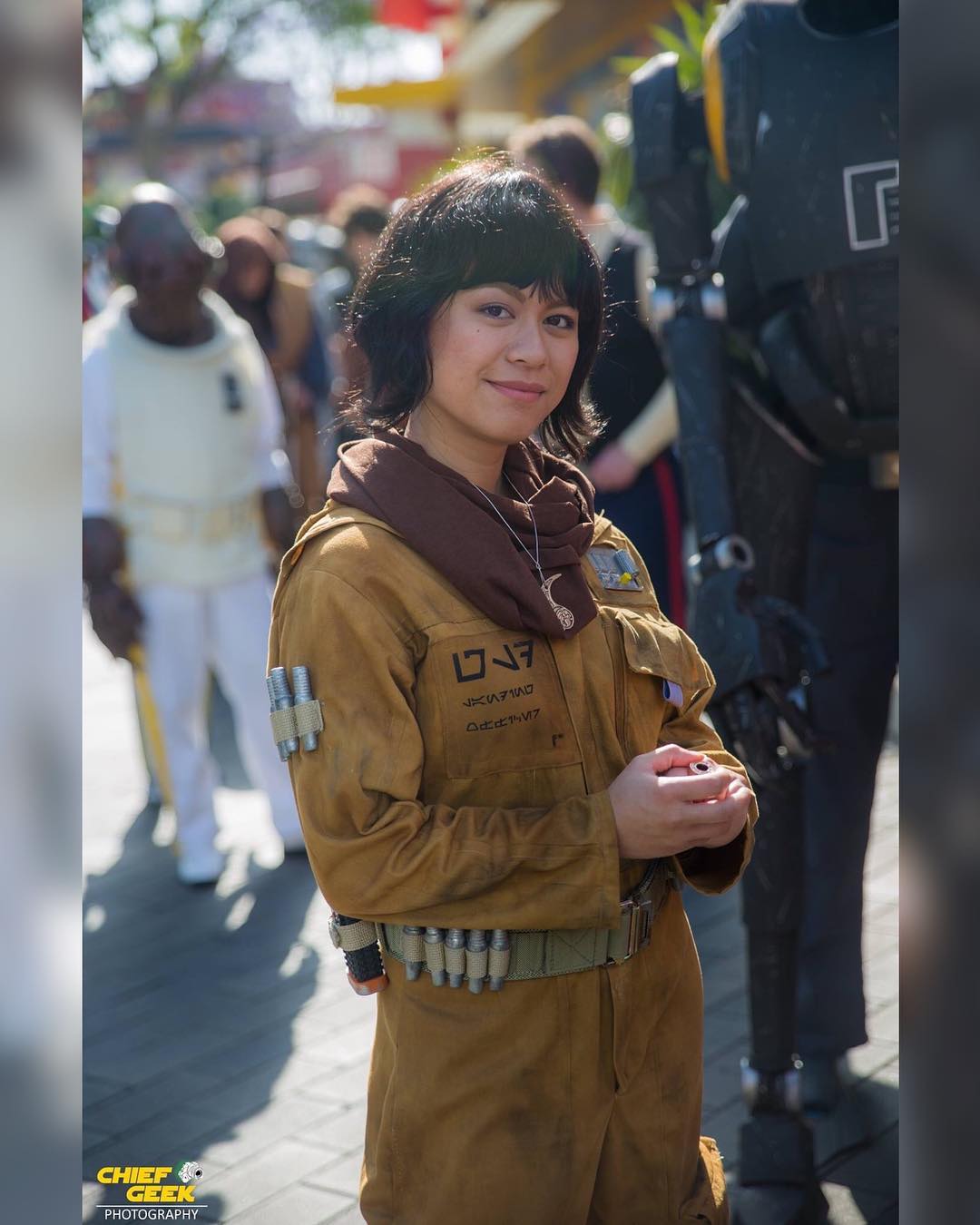 As you can see, her costume is not too difficult to replicate. Using an old set of work overalls, a brown scarf, and a few props will do the trick. You can read a Rose Tico costume guide for more details.

Another iconic character from the new Star Wars trilogy is Finn, known by his serial number FN-2187. He was trained by the First Order but quit and vowed never to kill on their behalf.

Pernell Langhorne cosplays Finn perfectly in the photo below. 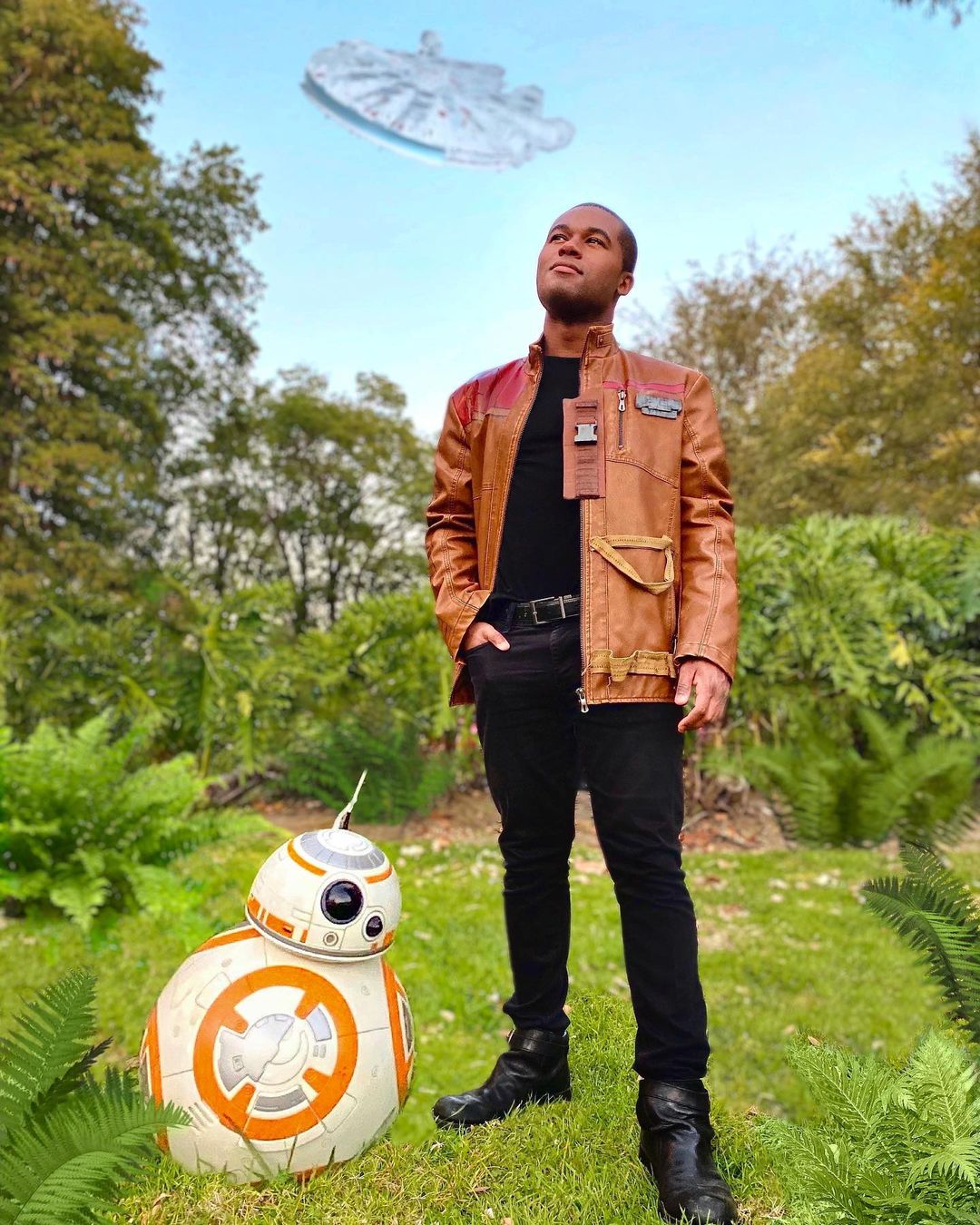 If you’d like to reproduce this look, your best choice is to buy this jacket and combine it with a black shirt, trousers, and leather boots. Consult this Finn costume guide for more help if you need it.

With 10 cosplays to choose from and guides on how to put them together, you won’t be in doubt the next time you want to cosplay a Star Wars character. All that’s left now is to choose your character.

Some costumes are easier than others, but you can source most of the pieces online quickly. It depends more on time. If it’s serious business and you think you’ll be in front of the cameras, you’ll want to choose carefully. If you’re having some fun, you can just get the essentials and go from there.