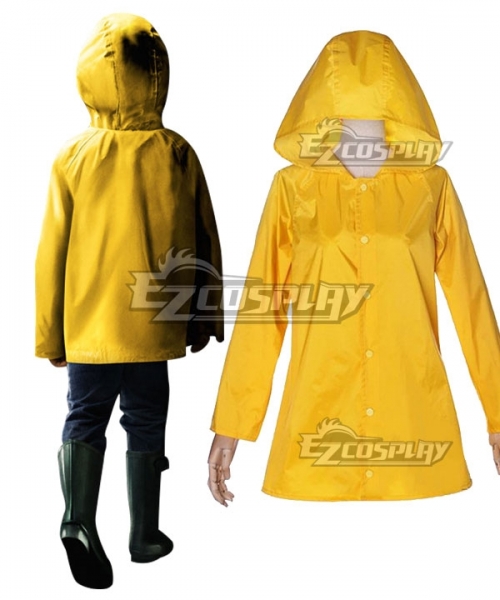 In Stephen King’s ‘It’, a new adaptation of the book and 1990’s TV miniseries, Georgie learns the hard way that talking to strangers (especially strange clowns) can get you into big trouble. As Bill’s little brother, Georgie is a young boy who tragically gets killed after playing near an open sewer. Nobody knows how the accident happened except for Bill and his six friends. They know that Georgie was lured to his death by Pennywise, a boogeyman-like evil clown that resides beneath the drains of their small Maine town.

Not only is Georgie a great Halloween costume, but this is a really cool cosplay idea if you’re an avid horror film buff.

Read our guide below to make your own DIY Georgie costume for cosplay or Halloween.

Georgie has light brown hair in an average cut. For an added creepy touch, use soil or dust to give your hair a washed up look.

After Georgie’s unfortunate death, in reappearances of his character his skin has taken on a corpse-like grayish green complexion with what seems to be mold and sewer water.

Pulling off this look is really simple. Just use some basic effects makeup. You can shop for it online or visit a local cosmetics store. Use a photograph of deceased Georgie from the film for inspiration.

Georgie wears a very bright yellow raincoat – one of his favorite outfits he often wore when playing with paper boats that his big brother made for him. After his death, it looks a little worse for wear and faded, but that yellow color still stands out even in the darkest of spots.

You can shop in many different places to find a yellow raincoat. Just look for a basic one and add dirt or makeup depending on your preferences to give it the look you want for your costume.

What caused Georgie to be killed in the first place? Well, Pennywise lured him towards a storm drain on the street by offering him a large red balloon, and the rest is history. To give your costume this finishing touch, blow up a red balloon and tie it to a string.

Purchase a pack of balloons at a party store, dollar store or online shop. Make sure to use helium so the balloon will float just like in the film! To give the balloon a washed-out look, put dirt or dust on it. It’ll definitely stand out at your next cosplay convention, floating above the crowd!

This is a great and creepy costume, and to really complete the look, get your friends to dress up as the rest of the gang from Stephen King’s ‘It’, like Pennywise, Bill, Beverly and Henry Bowers. Practice your best deceased scary kid laugh like Georgie, and his iconic whispered lines from the film. You’ll be sure to have a costume that’s to die for!

I’m not supposed to take stuff from strangers. My dad said so.