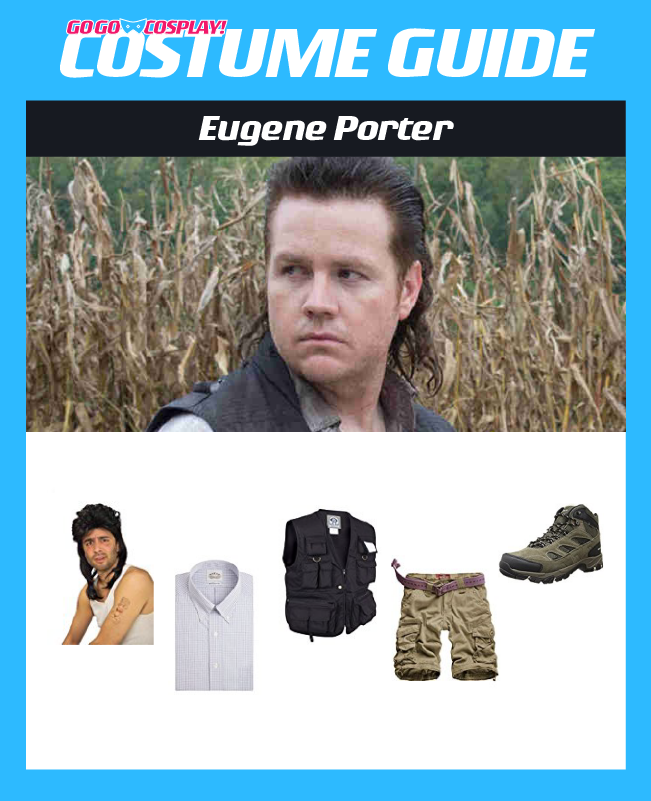 Eugene Porter is one of the main characters of the hit television series The Walking Dead. When he first comes across Rick Grimes‘ crew of survivors, he initially lies about being a scientist in Washington DC, but his intelligence and strong scientific skills are an asset to other survivors. He becomes a chief engineer among a team of them. Eugene is perhaps most known for his epic mullet which looks like he hasn’t changed since his college days in the 1980s. He’s not much of a fighter, but his mind makes him an invaluable asset to the group. He’s known for being rather selfish, antisocial and childish, but he’ll help people when he can. At the right times, this strange but likable guy can be a lot of fun and a good man to have at your side.

Check out the links below to make your very own DIY Eugene Porter Costume for cosplay or for Halloween.

Eugene’s hair is dark brown and pushed back into a very wavy mullet. You can use a wig, or if you have shoulder-length hair you can use hairspray to do a mullet of your very own! He also has small brown eyebrows and sideburns. If you don’t, you can draw them on using a brown eyebrow pencil or plan your costume ahead a few weeks and grow them out yourself.

Eugene often wears dark clothes that are somewhat baggy and boring. That’s good news for you, because you can pick out your own oversized dark clothes at any store with your own preferences. For extra authenticity, use Halloween paint to add blood and moss to the clothing so you’ll look like you just stepped out of a brutal apocalypse! Use scissors to cut holes in the sleeves and legs so you’ll fit in with the rustic scenery of the iconic television show.

Any fan of The Walking Dead knows that Eugene is a science whiz, and it often gives him an inflated sense of ego and poor judgement. Accessorize your costume this Halloween by picking up some plastic beakers and test tubes to carry with you, or even a pair of lab safety goggles and rubber gloves. Don’t forget a plastic gun so you’ll be prepared if the zombies show up to take a bite of your fingers!

The great thing about Eugene’s baggy clothes is that under your costume you can wear multiple layers, which is very useful when it gets to be that nail-biting cold weather on Halloween. You can wear a thinner dark long-sleeved shirt under a baggy black sweatshirt, for instance. Mix and match and make the costume your own!

“The smartest man I ever met happened to love my hair. My old boss, T. Brooks Ellis, the director of the Human Genome Project. He said my hair made me look like, and I quote, a fun guy, which I am. I just ain’t Samson.