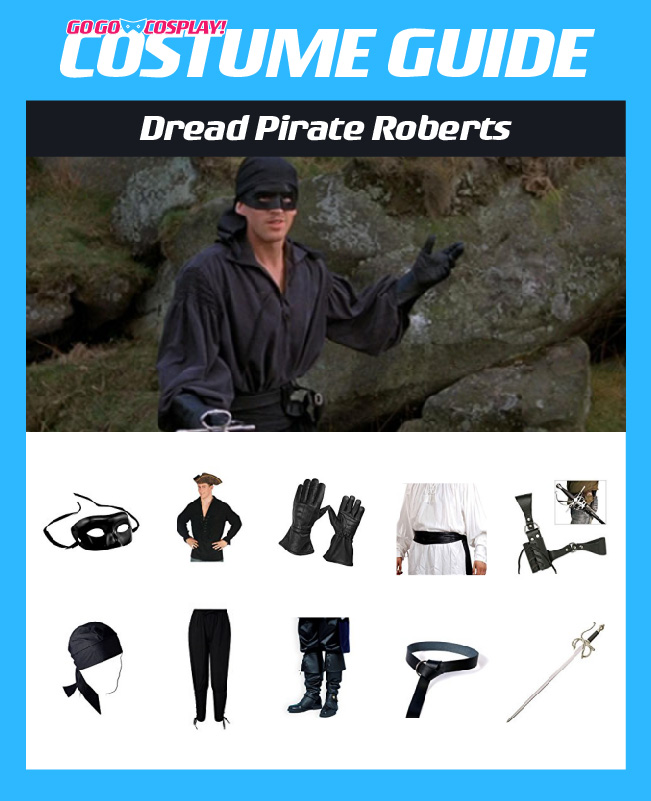 In the critically acclaimed 1980’s film The Princess Bride, Dread Pirate Roberts has a reputation for never leaving captives alive. Little is known about this violent masked bandit, and upon meeting the film’s hero, Westley, Roberts nearly kills him, too. Despite their rocky start after Westley’s ship is captured, the two become allies even though Roberts idly threatens to “probably kill him in the morning”. Roberts isn’t such a terrible guy, and if you’re a big fantasy fan with a love for terror on the high seas, a Dread Pirate Roberts costume is the perfect choice for your next Halloween party or cosplay convention.

Check out the links below to make your own DIY Dread Pirate Roberts costume for cosplay or Halloween.

Roberts’ hair is never seen. Instead it’s covered by a plain black bandanna tied over his head, giving him a dark and dangerous style. You can either buy a black bandanna online or make your own from black cloth of your choice. When shopping, search costume websites for a bandanna that has long black ties behind it.

You can also sew your own costume using black fabric, or improvise with black yoga pants and a black hoodie, which you can purchase online from most retail websites under the clothing sections.

Dread Pirate Roberts wears black pants, a baggy black long-sleeved blouse with string ties on the front and heavy black pirate boots. Browse an online costume shop or Halloween store for all these supplies, and when choosing your boots, pick ones with thick cuffs just like the ones on Roberts!

You can substitute any pirate costume boots, for example use some from a Captain Hook or Captain Jack Sparrow costume set if you need to select a pair quickly, or shop around for a pair you really love to make your costume all your own before your event.

Roberts has a thin brown mustache, a black mask like the Hamburglar from McDonald’s over his eyes and a long pointed sword (probably his weapon of choice for getting rid of his enemies!). You can buy a black bandit mask from most online Halloween or costume shops, or buy a black sleepwear mask online and cut eye holes into it.

Check online costume shops to purchase a fake mustache or grow one out yourself. You can also use a brown eyebrow pencil to draw one on if you prefer.

For the sword, check out a costume shop to find a long, thin fencing sword just like Roberts’.

Get your friends and family to dress up as other characters from The Princess Bride like Princess Buttercup and Westley and hit your next cosplay convention or trick-or-treat holiday in style!

Please consider me as an alternative to suicide.