Full Metal Alchemist is the best anime of all time. A lot of people agree with me on that. Edward Elric is one of the reasons. The character development, the storyline, perfection. The protagonist, Edward is a favorite to a lot of people. This makes Edward Elric cosplay costume a treat for everyone. 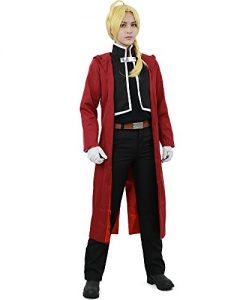 From the beginning Edward Elric was a peculiar character. His reactions when he heard of him being short and stuff. Those were priceless for sure.

But we all agree that his outfit was one of a kind. The Edward Elric cosplay outfit surely brings nostalgia back. It’s got everything an alchemist needs.

Here we have the Edward Elric Costume from the Fullmetal Alchemist Brotherhood anime. It’s got everything you need to qualify for the position. The position of a state alchemist that everyone wants. But it doesn’t come that easy. You have to earn it yourself. So better buckle up and learn all that Alchemy. The Edward Elric cosplay costume has a lot to it. I mean a lot more than what meets the eye. The anime cosplay outfit comes along with:

Edward Elric is surely one of the best protagonists out there. He has everything and has seen his share of things. This surely makes him a good pick.

The Edward Elric costume is a must-have for the fans. Whether it’s a convention or an expo, it’s got you. It has everything you need in one place.

It’s a great way to surprise those Full Metal Alchemist fans. They would never have seen this coming. The anime is old at this point. But it’ll never be forgotten. It’s one of the most beautiful anime ever made.

What better way to seal the deal than with the shoes. Shoes make a huge part of any outfit. The cosplay suit is the same. The shoes take it to the next level.

The shoes have got that stylish look to them. They’re crisp while reminiscent of the anime at the same time. This makes them one of a kind.

As a kid, his mother is all he has. But the world is cruel and takes away his mother from him. He has no choice but to resort to a taboo in order to change fate. But in the process he loses his brother, his only family left as well. He shares a deep bond for his family. Plus he cares for the weak and wants to save everyone.

He’s kind-hearted while surely insecure of his short height. But it’s his fault for not drinking enough milk. So he must laugh along with the jokes.

This will prevent things from going south. That way you’ll pull off the best cosplay costume. Be sure to pose as some signatures from the show. The pictures would come out great then. Moreover, be sure to look out for the weather. Don’t melt while pulling off the Edward Elric cosplay suit.