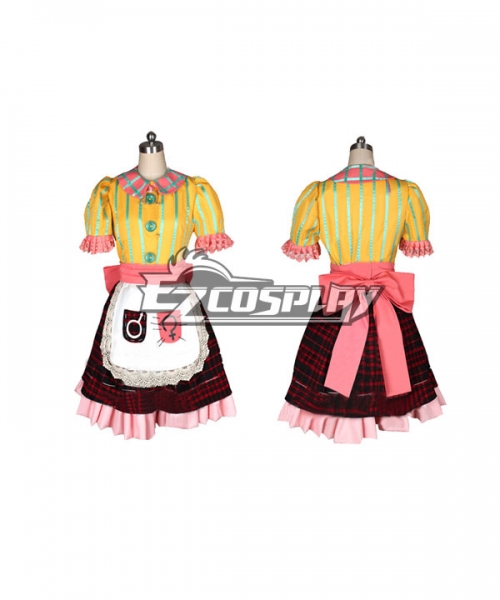 Lilo Pelekai is a titular character of Disney’s Lilo & Stitch. She is an eccentric young Hawaiian girl who is being raised by her older sister Nani after the death of her parents in a tragic car accident. One day Lilo mistakes Stich, an escaped alien convict fleeing from authorities of his homeworld, for a dog and takes him home not knowing the danger he poses. Their friendship blossoms as Lilo starts a kind of family with alien visitors like Stitch.

In the film Lilo is shown wearing several outfits, including a hula outfit, but she is most often depicted wearing a red floral dress with Hawaiian sandals. She has long black hair with bangs. There are many approaches that someone can take with a DIY Lilo costume, but we recommend adding a Stitch plush doll into the mix to really complete the look, because OHANA means family!

See our DIY Lilo costume guide for cosplay or halloween below.

Lilo has long black hair with bangs. If you don’t have a similar style of hair and want to create an authentic Lilo costume you can use a long black wig with bangs to get the same look.

The most essential part of an authentic Lilo costume is her red and white dress. Lilo’s dress features a white floral print in a Hawaiian style on red cloth. Her dress has short sleeves. You can find a replica of Lilo’s dress in the link listed above.

To complete the Lilo cosplay look you will need to use a pair of classic Hawaiian sandals with black or dark brown straps. One potential pair of sandals to fit this look is posted above.

“Ohana” means “family.” “Family” means “no one gets left behind.” But if you want to leave, you can. I’ll remember you though.