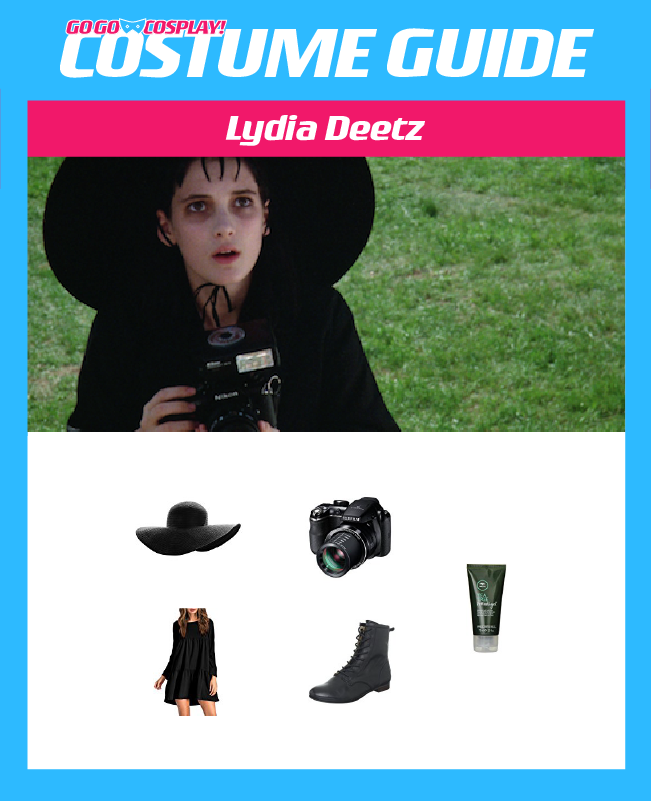 Lydia Deetz is a character from the 80s flick Beetlejuice. As a typical goth girl, the forlorn teenager captures the attention of the otherworldly man known as Beetlejuice – who believes he might be able to return from the dead by marrying her. She has a passion for photography and poetry, but most of all she has a deep interest in the paranormal and supernatural world where Beetlejuice resides.

Lydia has a signature jet black hair. She prefers to wear her hair in a bushy ponytail along with long, parted bangs. When it comes to her makeup, she prefers to keep it pale with a characteristic peach eye shadow. With just a little work, cosplayers will be instantly recognizable as one of the most iconic goth girls in film history.

See below to learn how to make your own Lydia Deetz costume for cosplay or halloween.

Lydia is known for her goth chic and you will need a wardrobe to match her dour personality. You will need a dress that’s in all black to capture the look. The dark dress invokes her obsession with the underworld.

It is also important to remember that Lydia has a strong preference for vintage clothing so you may want to experiment with more old-fashioned as opposed to contemporary clothing. We would recommend you go for a dress that is long-sleeved and then touch it up using a black lace shawl. Throw on some combat boots and you are well on your way to capturing the essence of Lydia Deetz.

Lydia’s hairstyle is a representation of her morbid and somber mood: stringy, greasy jet black hair which appears frantic and chaotic in a messy shag.

But keeping hair in this shape is not easy, so you will need a lead-in hair conditioner. To get the look of her pale skin, you can try using a pale face-powder or settle with any light-grey Halloween make-up for a more washed-out appearance. Just smudge some black makeup below your eyes to bring out the required hollow appearance.

In order to complete Lydia’s look, you need to carry a vintage camera as the character is known for her love for photography. With the camera, you can immortalize pictures of some of the main areas of interests such as cemeteries. You will also need to carry a book that’s similar to the one she’s seen with in the movie.