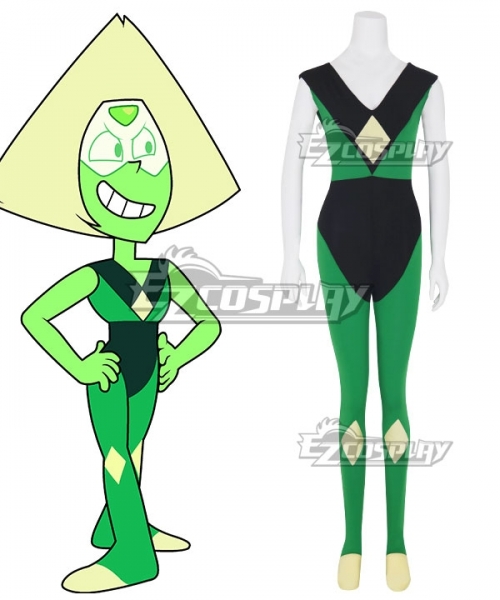 Peridot isn’t very friendly to say the least. In Steven Universe, she’s a ruthless, calculating gemstone who used to be a technician for the Homeworld. She gets stranded on Earth at one point and causes nothing but trouble, becoming one of the most prominent antagonists until eventually coming to a truce with the other gems to help them save the world. Afterwards, she ends up more or less staying out of the way, living in The Barn with her friends Pumpkin (a sentient pumpkin) and Lapis Lazuli (another gemstone).

Peridot can be incredibly cruel and spiteful but she eventually finds herself questioning her actions and renouncing her evil ways. Eventually she and Steven learn to respect each other, but they still have a rocky relationship at times. Peridot isn’t quick at all to admit her faults or flaws, and secretly she can be very insecure when it comes to her own life and friendships with others. Is Peridot your favorite Steven Universe character? Why not make your own do-it-yourself Peridot costume this year!

Read our guide below to make your own DIY Peridot costume for cosplay or halloween.

Peridot has a very unique hairstyle that can be a challenge to replicate. She has pale green hair that is triangular in shape and pointed at the ends sort of like Pearl’s. You can either dye your hair bright green or use a wig to achieve this look. Use hairspray or hair gel to shape it into triangular points. Glitter hairspray is best because it will make your hair sparkle just like a gemstone.

Like her name implies, Peridot has a small bright green triangular peridot stone in the middle of her forehead. You can use metallic green makeup or buy a flat faux green gemstone. Use setting spray to keep it from smudging if you plan to party hard.

Peridot has bright green skin. Use a light dusting of green makeup powder or green face paint for a similar look.

Peridot wears clear green goggles over her eyes, as well as a dark green leotard without legs that closely resembles a one-piece bathing suit. You can either buy this or design one for your very own using whichever fabric you prefer. She also has yellow diamond symbols on her chest and knees. You can use household plastic to make diamonds of your own and wear them as a necklace or strap them over your knees.

Peridot wears yellow slippers. You can either buy a pair or make them yourself from fabric or scrap plastic. For fun, get your friends to dress up as other characters from the Steven Universe gang, and you can all go to a party or convention together! With a Peridot costume, you’re sure to be the cosmic center of attention.