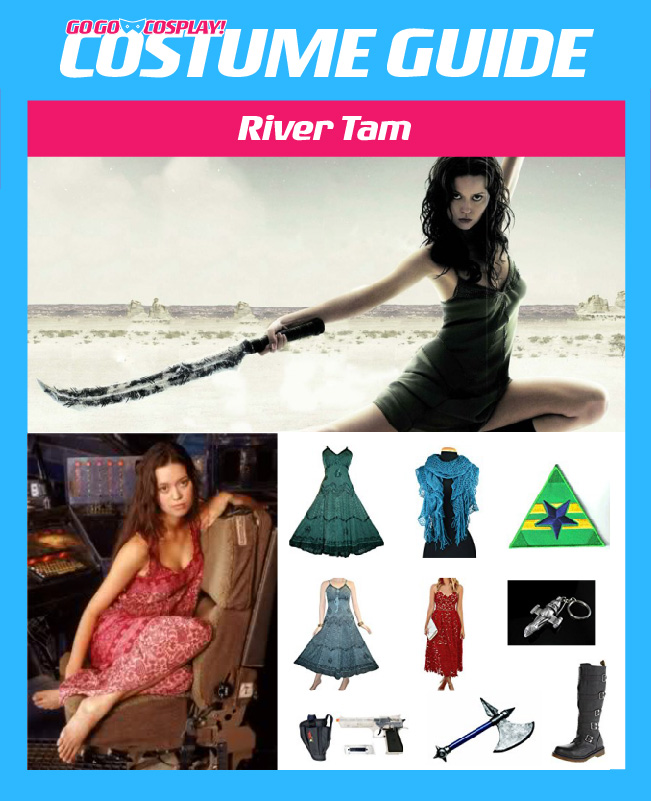 In the American TV series, Firefly, River Tam is a gifted teenage girl with a high IQ and amazing athletic abilities. She is from a very rich and powerful family living on a planet called Osiris. Life is great for River until her parents send her away to take part in a government experiment to weaponize her by cultivating psychic abilities. River Tam is an instantly recognizable cosplay choice for fans of the cult TV series.

River’s character is generally calm and pleasant. However, as a result of the experiments, she occasionally gets mental outbreaks which result in violent behavior. Due to her extraordinary skills and unmatched level of intelligence, she poses a great danger to everyone because she could easily harm people and no one would be able to stop her.

Read below to learn how to dress like River Tam from Firefly for cosplay and halloween.

To get River’s hairstyle right, buy a long brown wig and dampen it a bit with gel to best match her style.

River is a fugitive which means she doesn’t have much time for makeup. If you have to, you can use a little concealer to darken the circles under your eyes slightly to get a fatigued appearance.

Having being held in a facility for almost two years, River was mostly dressed in clothes that restricted her movement. This is why her fashion sense is a bit on the old fashioned side, but with a free spirit vibe. She is a fan of long, flow dresses and mosaic print.

You can get knee-length dresses in faded blue, green or red as depicted in some of the promo posters. Avoid jeans and accessories such as earrings and bangles. Aim for a more conservative and liberated look.

You may also want to get brown a t-shirt and cut it out to look like the t-shirt she sometimes wears on top of her dresses.

Being a fighter, River wears calf high boots. Just get a pair of black boots that reach past your calves.

You can equip yourself with a axe or sword prop, specifically a toy katana. These weapons are optional because they mostly refer to the movie ‘Serenity’. Either way, feel free to match them up with the costume described above.