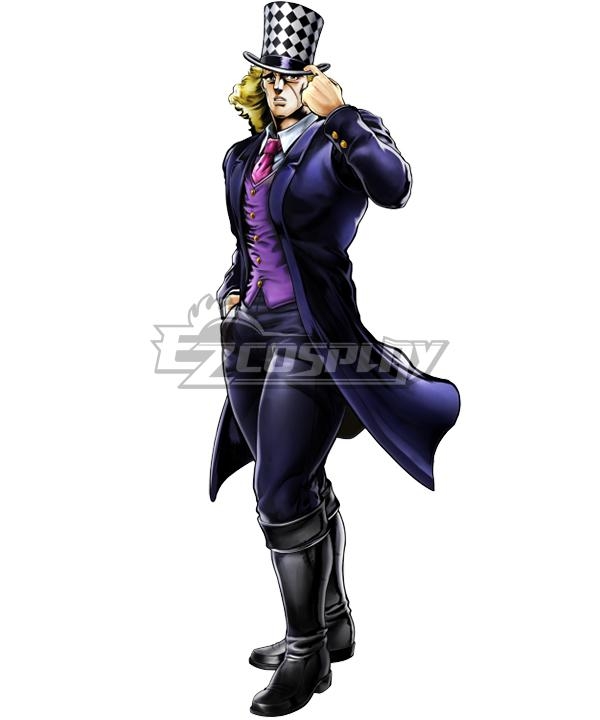 Robert E.O. Speedwagon is a character from the manga and anime series JoJo’s Bizarre Adventure. He is a street thug turned businessman who supports the Joestar family through his organization known as the Speedwagon Foundation. Even as a product of the rough and tumble Ogre Street in which he engaged in criminal activity, Speedwagon adheres to a certain honor code that makes him a very trusted and loyal ally.

Despite his rough upbringing, Mr. Speedwagon has a very distinguished style. He is most often depicted wearing a three-piece dark purple suit with a salmon-colored necktie. He pairs the suit with a pair of knee-length leather boots. Robert Speedwagon has long blonde hair and a distinctive scar on his face which runs down his cheek. Early on in the series he wears a bowler hat but soon trades it in for checkered pattern top hat.

Learn how to make a DIY Robert E.O. Speedwagon costume below.

Right about now, you’re probably wondering who I am. Allow me to elucidate ya! The name is Robert E. O. Speedwagon! I had a hunch Jonathan’s run of trouble might not be done, so I followed him back home. I like you, Jonathan, so I’m gonna offer up this little tidbit pro bono: living in the gutter, you learn to spot lowlifes pretty quick if you want to see tomorrow. I’ve trained my nose to sort out the bad ones from the good just from a sniff. This fellow reeks of brimstone and blood worse than anyone I’ve ever laid eyes on!