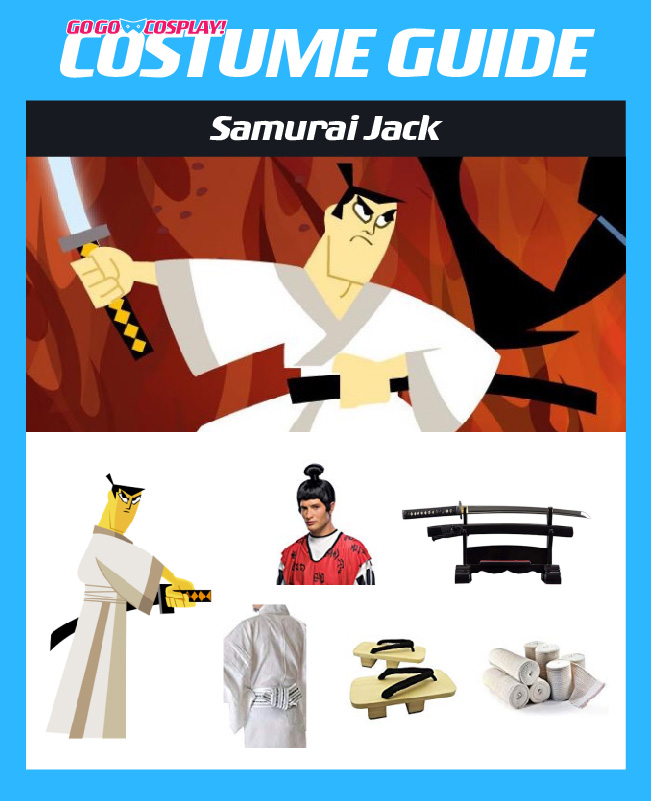 Samurai Jack is a wise Japanese prince who has trained under many masters. Jack’s life mission is to be rid of the demon Aku, who has sent him many years into the future against his will. Being the only thing standing between the safety of the world and Aku’s nefarious plans, Jack is devoted to his cause but is also a noble freedom fighter, protecting innocent people from certain doom. If you’re looking for a heroic kind of costume for your next party or convention, Samurai Jack is an excellent cosplay choice.

Check out the links below to make your own DIY Samurai Jack costume for cosplay or Halloween.

Samurai Jack has angular black hair, dark eyes and a stern, chiseled face. To get a similar style for your own costume, you can either dye your own hair black and style it yourself, or wear a wig.

Use scissors to cut the wig if need be, and use a black elastic to shape a small portion of it into a man-bun like Jack’s, which sits at the back of his head. For the thick black eyebrows and dark eyes, use black eyeliner to ring your eyes and a black eyebrow pencil, both of which are available from online retail websites or any drugstore.

Jack wears a long gray and white kimono with white cloth called an obi wrapped around his waist. He also wears lightweight wooden sandals. His clothing is drawn to closely resemble traditional Japanese apparel. You can purchase a similar kimono online from most clothing websites, costume stores and Halloween stores, or you can use heavy silk fabric and sew your own from scratch.

For Jack’s obi, you can purchase a traditional one or use any white cloth you’d like. Use safety pins to hold it in place if you want. For the wooden sandals, check out online websites or shoe shops to see what you can find, or improvise with a pair of beige flip-flops.

To add a finishing touch to your Samurai Jack costume, it wouldn’t be complete without his holy katana, a silver sword said to have the power to destroy Aku. With a sleek blade and a darker-colored handle, it’s a simple yet memorable item that Jack is rarely seen without until Season 5.

You can either purchase a replica sword online or from a Halloween store, or you can make your own using craft foam or recycled plastic. Use silver acrylic paint to give it a shimmering touch.

Never. They are just machines. I’ll find a way. I always have.