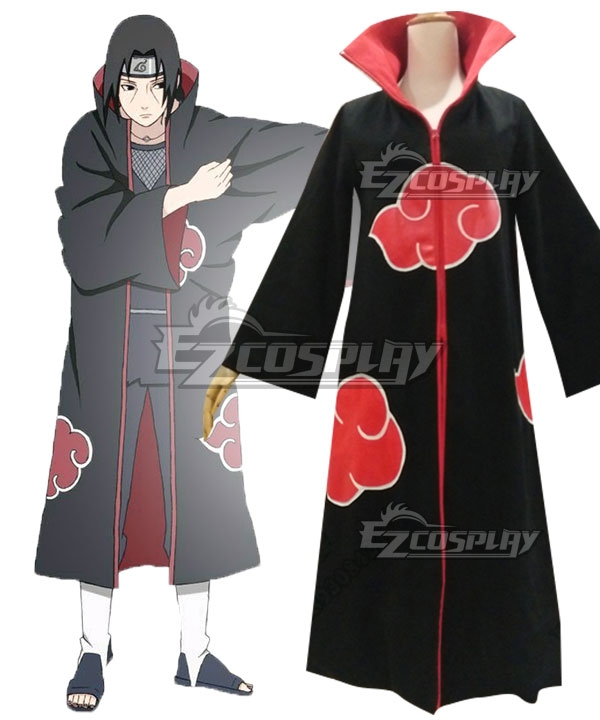 Akatsuki, an organization that makes it all look bland. It makes any syndicate full of baddies, any mafia full of thugs look plain. They’re reduced to nothing but a posse playing house. Ever since the beginning, villain groups are something that’s been done countless of times.

They for sure bring in the hype, the excitement that fans seem to not get enough of. Naruto Shippuuden gave fans what they wanted in so many ways. The best one is to introduce probably the best villain group ever.

It’s for sure the best to ever exist in anime, Its right from the get-go. This surely makes the Akatsuki Robe something else. It’s something that’d make Orochimaru lose faith in his reincarnation Jutsu and consider doing something good for once.

As cool as it sounds is as cool as it looks. The moment it was introduced in the anime, people were all about it.

The Akatsuki cloak gave out that aura. It exhibited that mysterious gloomy veil that made the malicious intent come out even more. I still remember how kids were drawing those clouds on their black jackets and hoodies.

All this while parting their hair in the center. These kids underestimate Itachi for sure. As hot it was back then, it’s still in town now. The Akatsuki cosplay coat is something that everyone would love to get their hands on.

Here we have the exact Akatsuki Robe from the Naruto anime series that’s a legacy. It’s an eternity viewed from the eyes of a kid wanting to achieve his dreams.

It’s admirable in all senses and something that we can learn a lot from. The show’s got something for everyone that makes it a good fir no matter who is watching it.

The Akatsuki Robe is for sure one of the most memorable cosplay costumes from the show. The Akatsuki cosplay outfit comes along with:

We’re all Naruto Shippuden fans. I mean who can’t love a boy trying his hardest while being neglected and forsaken by everyone just because his dreams are too big for himself?

He was admirable in every way and surely taught us the fact that only the sky is the limit. He gave us the meaning of the word limitless when it comes to dreaming and setting up goals for yourself.

But most of all, the series featured a lot of villains and I mean A LOT. Still, in my opinion, the Akatsuki stands out the most. It was for sure a group that was on par with the big ones like the Phantom Troupe from Hunter X Hunter.

In addition, just look at how that Akatsuki coat looks, just look. It’s giving out the aura of complete mystery, complete gloom that’s the definition of the word cool itself.

The conventions and expos would surely love them a good Akatsuki cloak. Plus, you can all dress up the same and complete the cosplay yourself. Look out for Team seven and the others there as well and play out some encounters.

Sure the Akatsuki cosplay costume is cool and makes you one of them instantly. But, there’s more to it now, isn’t it?

The rings are something that’s a must whether you’re planning on playing with paper like the Deidara cosplay. Or you want to go around making a lot of crows follow you like the Obito or Itachi cosplay.

The rings make a huge part of it all and are something that the Akatsuki costume is incomplete without. They’re stylish and look cool as well. This makes them serve a lot more purposes than to just make the cosplay costume complete. Utility at it’s best, providing us with way more options and making things a lot easier.

The Akatsuki were fighting for a cause. A cause that each and every one of them had. Most of them being different but intertwined with the others.

This was what brought them together in the first place. But still, everyone had their own schemes and policies they wanted to follow, the goals they had in mind. Things weren’t good, time was never kind to each and every one of them.

This made them resent, disdain the world, hate everyone around them as their lives had been made living hells by something that happened in the past.

Things were so bad that they even betrayed their own villages. This is where they grew up in and put that sign, the mark that signifies the word rogue.

These Itachi cosplay Headbands bring out and deliver the true sense. It gives out the true feeling that brought the members close to each other in the first place. They are absolutely necessary when it comes to the cosplay costume.

We’ve all seen those swift legs, like a dance, making everything look disorganized while no step wasted on their part. The shoes are a must when you’re going for the Akatsuki coat since they’re something that’ll make it complete.

The Shoes make a huge part of any outfit let alone the Akatsuki cloak. The shoes bring out the swiftness while being durable and comfortable at the same time.

They stay true to the original shinobi code, being simple yet beating the Jordans when it comes to sprints and dashes. The moment you wear them, you’d feel your records improving and your feet instantly feeling better because of the comfort they provide.

Tobi, a character that did a complete 180. From a timid, weak looking random who people expected nothing from and were ready for his death the next episode to someone that reshaped the entire series. Not to mention he started another ninja war.Things were really random when it came to the character. He always required to be with someone else in order to make things happen, being useless otherwise.
But, things took a turn with that iconic, that’s my boy line. That surely made our eyes come out of our sockets as to process what had just happened. The mask spoke a thousand words while making us see only one and a period at that as well.Tobi is for sure one of the best characters. He’s someone who people really like for his entire story and character itself. The Tobi cosplay mask along with the Akatsuki Robe is something that’d make all the fans rejoice and recall the memories that the character gave them.

Make sure to try out the Akatsuki cosplay costume prior to the occasion to have a feel of the outfit. Walk around to see if it’s too baggy or not in order to be able to make adjustments in time. For the boots, walking long distances can help you get a feel of them that’s very necessary to make sure things go smoothly.

The rings and the necklace are a must for the Itachi cosplay. Keep up the appearances when it comes to the different characters and you’ll surely pull off the best cosplay ever.