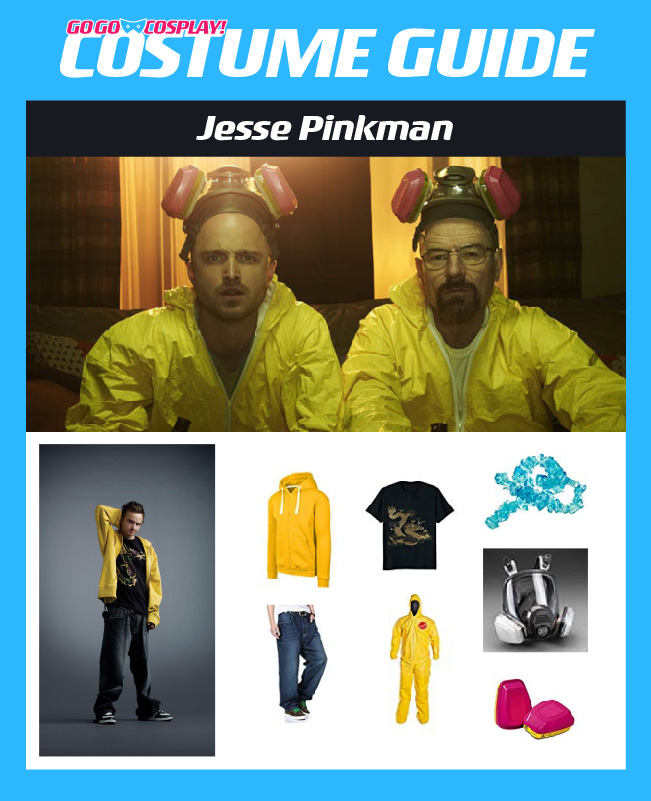 In ‘Breaking Bad’, Jesse Pinkman is Walter White’s partner-in-crime, helping to manufacture crystal meth and make it big in the drug trade. Jesse’s specialty was making a unique product, opting to douse his meth product in chili powder, which earned him the nickname “Cap’n Cook”. Walter was not amused to say the least. While the two men often disagree and argue over many things, they are good friends for most of the series, with Walter becoming somewhat of a father figure to him.

Check out the links below to make your own DIY Jesse Pinkman costume for cosplay or Halloween.

How to Dress Like Jesse Pinkman from ‘Breaking Bad’

Jesse has scruffy dark brown hair in an closely cropped cut, a scraggly beard including a tiny soul patch under his lower lip.

If you can’t grow your facial hair out int he same way, you can use a dark brown eyebrow pencil or brown washable marker to draw it on or purchase a similar fake beard.

Jesse isn’t really a bold kind of guy when it comes to attire. In the kind of illegal business he’s in, he can’t afford NOT to blend in!

He often wears a basic black shirt under two layers of plaid – a light beige plaid buttoned-down shirt beneath a darker brown jacket with larger plaid squares. For pants, he usually goes with blue or brown jeans.

You can find the right clothing components for your costume through online retail websites, thrift stores or your local shopping mall. Keep an eye out for oversized, slightly faded clothing just like Jesse’s.

When he’s cooking alongside Walter White, he wears a yellow HAZMAT suit. You can find a similar outfit online or at certain trade stores.

There are two things Jesse is often seen with in various scenes of ‘Breaking Bad’ which stand out as memorable – a gas mask similar to Walter’s when he’s working, and a dark knitted wool hat.

For the gas mask, look for one that has two filters. You can purchase one from online retail websites or work supply warehouses.

For the hat, which is plain black with red edging (sometimes he wears different hats but this seems to be a favorite of his), you can check out sports stores, clothing websites or thrift stores for a good one. Browse for winter hats online to see what you can dig up!

Get your friends to dress up as other characters from the series like Walter White, Saul Goodman, Marie Schrader and Skyler White so you can all go to your upcoming event together as a team!

“Yeah Mr. White! You really do have a plan! Yeah science!