Kamado Nezuko is without a doubt the best new anime girl out there ever since Demon Slayer made its debut last Spring. Her whole outfit is really unique and one of a kind with all those cross lines and that bamboo tube, not to forget about the hair that’s a sign of the Kamado family. From the Nezuko Kimono to the hair, to the shoes to the various accessories, I’ve got you covered on everything and am sure you’ll become Nezuko at the end of this for sure.

Here we have the complete Nezuko Kimono, being copied as if we’ve screenshotted and printed the very character out in the real world. It’s perfect for cosplaying to various expos and conventions. For a fact it’ll draw a lot of attention to yourself considering how popular Demon Slayer is these days.

You can take it a step ahead as well. By that, I mean to rock it on cosplay conventions with the demon side she has. Vampiric teeth and some mirror training is all that’s required for that. A complete 2 in 1, utility at it’s best.

This Nezuko outfit is very same attire from the Kimetsu No Yaiba anime, the very outfit is here. Everyone start designing one for themselves the moment they saw it animated from head to toe.

The Nezuko pink kimono with the white blend for starters. Both colors going hand in hand to wonderland. Next up, the cross lines. They follow a certain pattern in every direction making webs at times making it one of a kind. Then there’s the belt with those chess boxes on it. The black color replaced by red to avoid copyright issues. The leg covers above her shoes, everything is here. The upper above the kimono, the same one to save her from the freezing cold mountains, making it perfect. The bamboo tube comes with those strings. So it’s ready to be attached to the mouth.

If you’re a Demon Slayer fan, a Nezuko one at that as well, this is perfect. She’s quite much of a favorite now. If you’re looking to cosplay as Nezuko to a convention or an expo, this is the best bet. The dress, kimono, is the all in one perfect package for you to get.

The best thing about this is that there’s everything in one place. Things sure got easier. I’ve seen a lot of cosplay outfits here and there cause there’s a multitude of developers at this point. But, this one is the best and replicates it in a very good way. It sure makes it impossible to tell it apart from the Demon Slayer anime one. Plus another fact that makes it so sweet is that it can be rocked on a convention. The combo with that scary look she has two sides of a coin they say. This is the perfect treat for the Kamado Nezuko fans and is a must-buy for them. 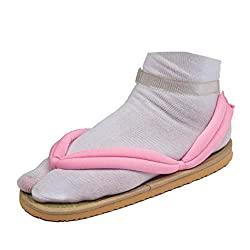 The traditional Japanese style shoes that are reminiscent of the old time. The Edo era in particular. Nezuko wears those sandals and very simple ones at that as well. The shoes from the anime have a light brown base with the pink ribbons making a cross. These are those very sandals in real life. Reincarnated if I might say.

Everyone loves Nezuko right? Her whole character is so adorable and she’s kind and righteous to the very core. If you’re looking to cosplay, to a theme party, or for convention, this is the best bet. It’s sure to save you all the trouble to make some yourself. Which we devise all kinds of ways and means to come up with something. Making cosplay outfits on your own can be really difficult at times. This is easy to wear and easy to order and get soon as well.

Things only look good, look appealing when they’re in the right place in the right way. They lose their charm and attractiveness if they’re not worn or done in the way they’re supposed to. It’s hard to wear cosplay outfits on your own. Cause we’re not familiar with those kind of attires unlike the Japanese people.

They wear these kinds of outfits almost every day. Here’s a perfect tutorial to learn how to dress up like her. The Nezuko cosplay costume-wearing tutorial itself and not end up looking like her demon form with that dishevelled appearance. That way you’ll scare a lot of kids ending up in the police station. It’s pretty easy and short which makes it very convenient for each and every one of us. Just to watch it once and be ready to get all packaged inside of it.

You can even watch it while on your way to the expo or convention. It’s really short and self-explanatory, zero questions popping up.

The makeup is a must when cosplaying as fictional characters. It’s like the finishing touch we apply to make the thing look perfect and as close to it as possible. All dressed up, everything perfect and in it’s place, without the makeup, nothing. A lot of people would fail to recognize the character even though Nezuko is so popular.

Nezuko cosplay makeup is not that hard in the first place. But it’s better to look at someone do it at first in order to not mess up anywhere at all. No need to go to those expensive makeup artists. They would make you reconsider your expo or convention trip. Here’s a video that’ll teach you how to do Kamado Nezuko makeup. It’ll get you the Kamdo look in a matter of a few minutes. It’s really easy and the person explains it really well . By watching this you’ll be able to get the whole Kamado makeover in no time and are ready to go.

Kamado Nezuko has peculiar hair with the color-changing at the very tips of those hair strands. Kamado hair in an instant. Best to cosplay as Nezuko to a convention or an expo. Hell, even colleges have cosplay themes and anime days now. This is your best bet to get that anime hair in real life. No need to go to the salon to do all kinds of stuff to your hair.

We all know that ultimately damages them without a doubt. Natural hair with that color? Which is not uncommon considering it’s black. Coloring the tips and styling the strands like that can be pretty difficult and time-consuming. So this is a pretty good solution to that problem for sure. A perfect treat for all the fans attempting to get Kamado hair.

Nezuko at first is shown to be a cute girl, loved by everyone girl. She cares for her brothers and is there to help her mom despite the chilly winds of the mountains who chat with the sky almost every day. The cold sure strikes the skin like steel but she’s shown to manage and put up a smile even after all that. Her love and affection for her family are really pure and true. She’s always there for them and even after turning into the demon form, she didn’t forget that.

When Tomioka Giyuu is about to execute Tanjiro for being an accomplice, she rushes forward to save him. This showed Giyuu that her brother is all that she’s left and loves him the most. She’s complacent and listens to her brother all the time no matter what he tells her to. Her love is not only confined to her family.

It’s shown later on that even though offered forcibly, she would never eat human flesh or drink human blood. Nostalgia, making us remember good old Kaneki for a second. She has a pure heart that everyone recognizes and becomes aware of later on. Even those demon corps who’s known to kill every demon on sight.

I think she is a really good character and one that shounen fans have loved since the Dragon Ball days. If you watch these tutorials about the Nezuko kimono and makeup, you’re sure to pull off the best Nezuko cosplay ever for sure.