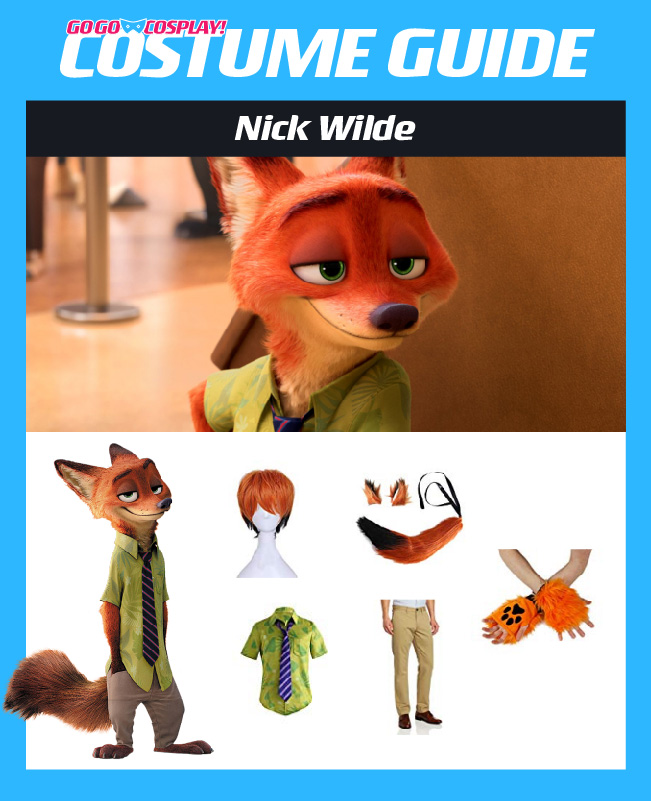 If you’re looking for a costume to charm the crowd at your next Halloween party or cosplay convention, a Nick Wilde costume is a great way to stand out, especially if you love animals and Disney films!

In Disney’s ‘Zootopia’, Nick Wilde is a charming con artist fox who isn’t such a bad guy despite his life of crime, but sadly he’s often seen by other animals as dangerous and violent simply because he’s a predator. He befriends Judy Hopps, a young police officer bunny who’s trying to solve Zootopia’s underlying corruption and a strange spree of predators going “savage”.

Learn how to dress up as Nick Wilde with our DIY costume guide for cosplay or Halloween.

Face:
As an anthropomorphic animal, Nick doesn’t have hair, just a lot of foxy orange fur! You can either wear a fox mask or use reddish-orange and white face makeup to create a fox face yourself! You can also purchase a fox ear headband or make your own by using plastic, foam or paper to create ears taped to a regular hairband.

To find a good fox mask, check online through costume websites and retail stores, or check out nearby local Halloween shops.

If you’d prefer to use makeup, you can purchase this from most Halloween stores, drugstores and online makeup websites. Here’s a great makeup tutorial to get that foxy look:

Furry Add-Ons:
Nick has dark orange fur on his arms and feet, not to mention a huge bushy tail in the same color. To get a similar look, you can use orange body paint or wear furry orange gloves and arm-warmers.

For Nick’s bushy tail, you can either purchase a fake costume tail from an online costume website or party store, or make your own using craft supplies and fake fur. Make sure it’s as fluffy as possible for a more authentic look!

Outfit:
Nick is a sharp dresser. He wears a formal black necktie with small pink diagonal stripes, a loose fitting pea-green dress shirt and light brown banker pants. Any major retail outlet website or shopping mall is a good place to look for this stuff, or you can use fabric to sew your own from scratch.

Nick doesn’t wear shoes, but he does have fuzzy paws – a pair of novelty paw bedroom slippers or costume feet can work for this.

Get a friend to dress up as Judy Hopps and hit the cosplay scene together, or if you’d prefer to be the enigmatic loner like Nick is at first in Zootopia, going solo is another option.

“I’m not looking for any trouble either, sir. I simply wanna buy a Jumbo-pop for my little boy. You want the red or the blue, pal? 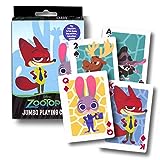