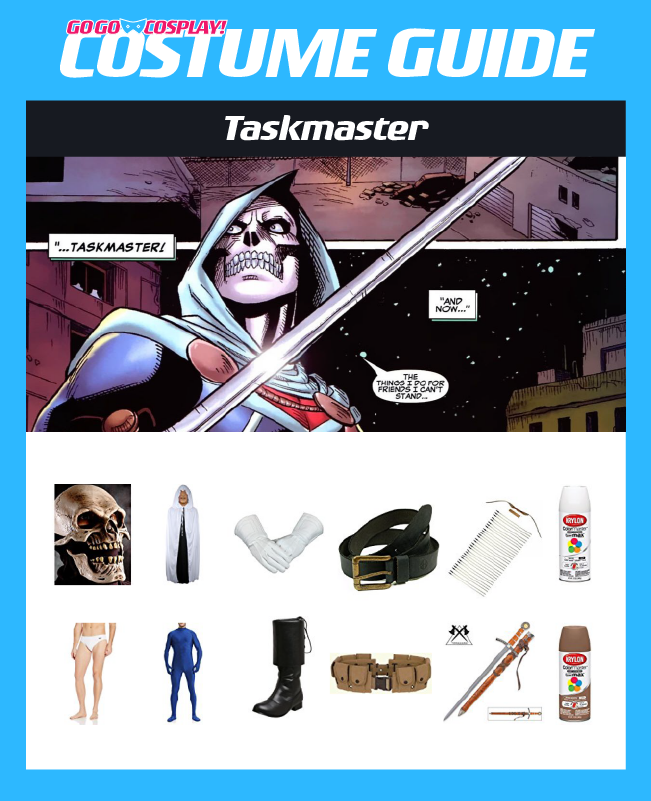 Tony Masters, more commonly known as Taskmaster, is a fictional Marvel comic book character who sports a rather sought after costume. Though he is most often portrayed as a super villain, he sometimes play the role of antihero, having been both an enemy and ally of heroes like Deadpool.

He is known for wearing long capes (like those used by magicians) and a skeletal style mask. Taskmaster is often seen with a sword and a replica of Captain America’s shield.

Keep reading to learn how to dress like Taskmaster for cosplay and halloween.

Depending on what look you are going for, the best option for the body is a black or (preferably) blue morph suit. This will give you the best overall look. If you want to add some features then abs are the way to go! Add extra pieces of the same color fabric and stuff it with a filler such as cotton wool, then carefully sow these on so you can resemble a six pack. Or get a muscle suit to capture the look of his physique. Wear a pair of white briefs over the morph suit to complete the piece.

For his footwear, you want to aim for some over the shin style boots. These can be black but should ideally be white if you’re going for the original look. They have a cuff over the top which can be added with some fabric and a hot glue gun if you can’t find the right pair of boots.

Taskmaster wears a large belt that can be recreated by painting any belt gold and adding gold string/ribbon to the belt buckle on either side. The belt buckle should match the color of your morph suit and can be created by cutting cardboard into a circle with a gold center.

No Taskmaster costume is complete without a cape. Ideally, it should be white. A cape is a vital part of any cosplayer’s wardrobe but it will need a hood to work well which can easily be added to a cape using old fabric such as a bed sheet.

A bed sheet can also be used to create the cape from scratch, make sure this is long-to the top of your boots is ideal! Oh, and don’t forget a pair of white gloves, leather if you can to really finish this off!

Taskmaster uses an assortment of weapons, including a bow and arrows, swords and a shield. You can attempt to make these items yourself using EVA foam and craftwork, but these items are easily purchased online.

Do you have any idea who I am? I’m Taskmaster. I can counter anything you throw at me. I can mimic and adapt to any move you make. I can anticipate any blow. I can– AGGGGHHH!!