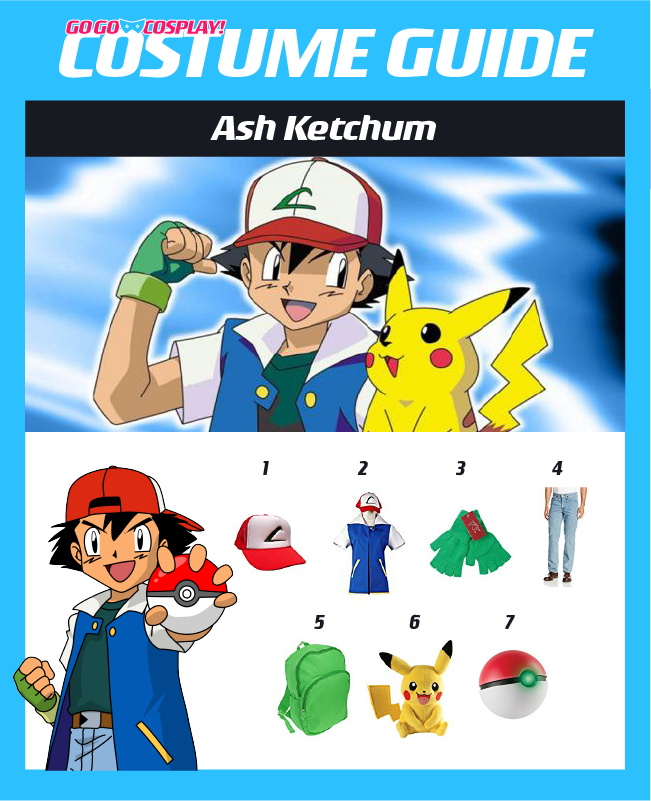 Ash Ketchum, the main protagonist of the Pokémon video games and anime series, had many unique and interesting looks during his journeys. He is probably best known for the iconic outfit he wore in the original Pokémon series which consisted of a a blue and white short sleeved jacket with yellow trim, fingerless gloves, blue jeans and a red and white baseball cap with a stylized ‘L’ on the front. As an experienced Pokémon trainer he is rarely seen without a Poké ball and his first and most trusted Pokémon – Pikachu!

As Ash evolved throughout the series, so did his style. His shoes, jeans and jacket changed appearance from one series to the next. He also swapped out hats, often consisting of different emblems on the front. However, his outfits did tend to maintain a similar color scheme consisting of red, blue and yellow. Learn how to put together your own DIY Ash Ketchum costume below.

Ash Ketchum was a legendary Pokémon trainer from the popular Pokémon anime series and video games. His love of Pokémon was shaped early on in his life when as a young boy he encountered some of these creatures when he was forced to take shelter in a hollow oak tree during a major storm. From that moment forth he knew he was destined to be a Pokémon trainer.

When he first began his quest to become a Pokémon trainer, Ash originally targeted Squirtle to be his first Pokémon. But due to his tardiness, when Ash arrived at Professor Oak’s laboratory to select his first Pokémon only Pikachu remained. Their relationship was solidified when Pikachu saved Ash from a horde of Spearow using his supercharged Electric-type move. They have been pretty much inseparable ever since.

Ash began his adventure capturing Pokémon along with his companions Brock and Misty. Ash quickly gained in skill and eventually made his way into the Pokémon League, fulfilling his childhood dream.

“I’m having a major hat crisis. Could you try to steal Pikachu some other time?”

Pokemon: Adventures in the Orange Islands - The...
Check Price