Cable is a soldier of the future who made his first comic book appearance back in the 90s but will be making his big onscreen debut in Deadpool 2 being played by Josh Brolin. Covered in giant guns, Cable is one menacing figure! He first teaches a whole new generation of mutants in the X-Men comics and he has become a treasured icon of the 90s, but what exactly he’ll be doing in the new film isn’t entirely clear. Will he be Deadpool’s friend, or foe? Whatever it is, Cable’s sure to surprise and thrill any fan of the first Deadpool flick!

Resembling G.I. Joe on steroids, Cable is a great character to dress up as, especially at comic book conventions and halloween parties. Are you ready to build the most awesome costume ever?

Read our guide below to make your very own DIY Cable costume for cosplay or for halloween.

Get the Full Cable Cosplay Costume from Deadpool 2 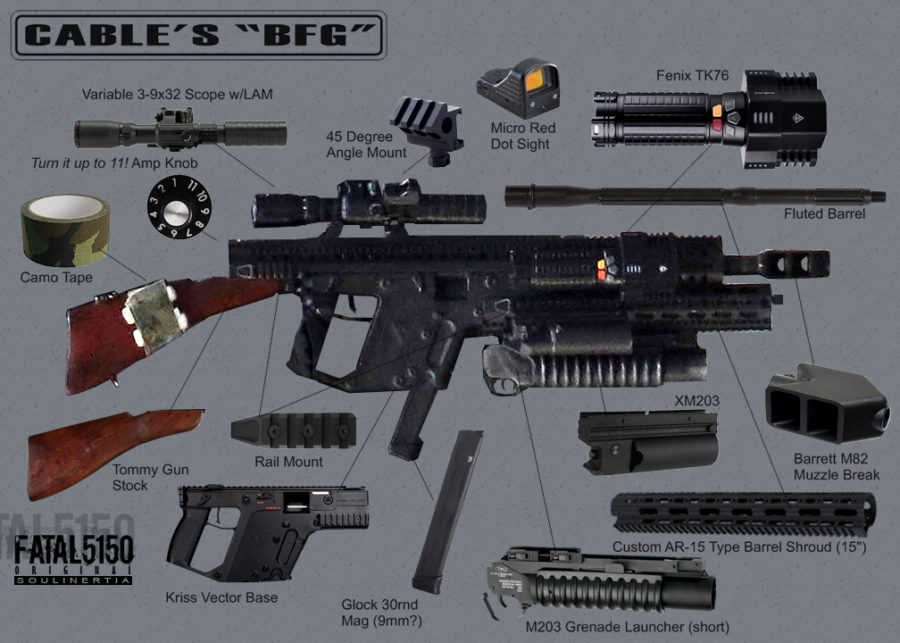 Cable has sandy blonde hair in a military crew cut style. In the comics, his hair is pure white. You can choose whichever way suits you best, or wear a wig to get the look of this powerful soldier to impress your friends. If your hair isn’t blonde you can use makeup dust to give your hair a lighter sheen for Halloween, or you can use household baking flour, an effective but somewhat messy alternative.

When film photos were released of what Cable will look like as a character, the first thing fans noticed was that he totes an enormous machine gun over his shoulder. The gun is made from various gun parts that are available for sale at most gun shops. We’ve linked to a great BFG gun cosplay guide above. This costume prop is a must for any science fiction aficionado.

Or you could also get an oversized Nerf gun and paint it to match the look and style of Cable’s gun in Deadpool 2.

If you’re going to a school or business party, make sure you check first to see whether or not there are any policies on bringing items that look like weapons into the building. Otherwise, have fun!

Cable wears a dark green military t-shirt, black army boots, green camo pants and a utility belt loaded with weapons, including knives, small guns and… a teddy bear!? Yup, this tough-as-nails soldier carries a dirty old teddy bear with him, strapped to the side of his belt, which will be explained in the upcoming film. You can buy a teddy bear or use an old one of your own, and cover it with fake blood and grease to get the ragged style of Cable’s beloved toy.

Cable has one robotic arm, completely mechanical with sparking electrical wires running all through it. You can buy a fake robot arm or design your own with scrap metal and EVA foam. He also has one red eye that glows like a laser light. You can use red colored contact lenses to do the effect of one red eye, but remember to read the sanitary precautions about non-prescription lenses first to avoid getting an infection.

I was born into war, bred into it. People think they understand pain, but they have no concept of it. What’s the most pain you’ve ever felt? Maybe the kind that leaves you more machine than man.