In the film Deadpool, Negasonic Teenage Warhead is a young mutant with the ability to detonate an atomic blast radius around herself. As a trainee with the X-Men she was tasked with the job of recruiting Deadpool to the superhero team alongside fellow mutant Colossus. Negasonic also appears in the Marvel Comics, but with a different backstory, appearance and powers, including telepathy.

As her name suggests, Negasonic Teenage Warhead is depicted as a brooding teen who wears all black – even black lipstick! She has a shaved head and wears a long black leather trench coat, a black hoodie and mock turtle neck as well as pleather pants and leather boots. But her outfit isn’t all doom and gloom… She adds a touch of color by wearing a yellow belt which might be a nod to the X-Men. She also wears a more traditional looking X-Men uniform which is a yellow and black jumpsuit.

See below to learn how to make a DIY Negasonic Teenage Warhead costume for cosplay or halloween. 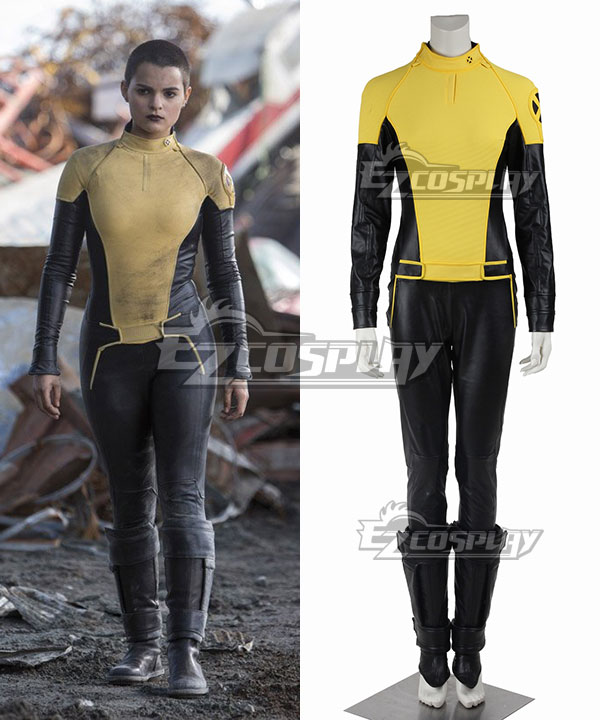 Negasonic sports a jet-black buzzcut and uses dark eyeliner and mascara to darken her eyes. She also wears black lipstick.

As a member of the X-Men being mentored by Colossus, Ms. Warhead sometimes wears a full leather bodysuit as part of her uniform. The suit consists of a yellow and black leather design which covers her entire body, including her arms. The uniform has a tapered yellow design above the torso with a mock turtleneck collar. There is an X-Men logo patch on her left shoulder as well as an X-Men pin on the collar.

Underneath the double layers of coats and jackets, Negasonic Teenage Warhead wears a black long-sleeved turtleneck sweater. Can a teen warhead overheat?

She continues her goth chic look with a pair of black vinyl skin-tight pants and a pair of knee black leather boots.

Negasonic does not wear many accessories except for a cloth yellow belt which goes well with the X-Men logo pin. She also wears a pair of fingerless black gloves.