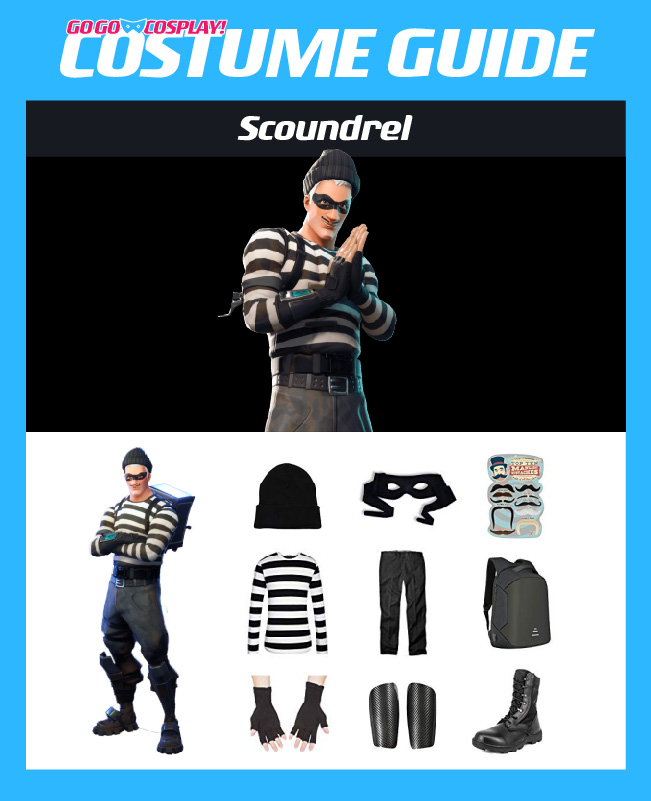 Sneak your way through the crowd at your next convention or Halloween party with a Fortnite cosplay favorite – the Scoundrel costume! Scoundrel is a burglar-themed male skin from the Jailbird set in Fortnite Battle Royale. Paired with Rapscallion (the female version of the skin), Scoundrel is part of a duo that slink through the battlefield setting many traps for hapless victims along the way.

Scoundrel’s outfit is based on the classic look of old-timey bank robbers and burglars, featuring a white and black striped shirt, a black wool-knit cap and a black burglar mask. The Scoundrel is a fun skin to wear in game, but its even more of a hoot in real life!

We’ve put together a DIY Scoundrel Fortnite costume guide to help you recreate the look for cosplay and Halloween. Check out the links below!

How to Dress Like Scoundrel from Fortnite Battle Royale

Scoundrel has the classic bandit look which begins with his use of black knit beanie and a small black mask around his eyes like those worn by bank robbers and thieves in classic cartoons. His look is punctuated by a pencil thin mustache to give him that Pink Panther vibe.

Most of these items are easily found at most costume shops and on online stores like Amazon. If you don’t want to go the fake mustache route, you can either try to grow out a pencil mustache or use a sharpie or black face paint to draw on a pencil-thin stache.

To pull off the Scoundrel costume, you will need to track down a white and black striped long-sleeved shirt like one traditionally used by cartoon burglars (think Hamburglar!) and pair that with some black pants. To tie up the costume, use black combat boots, black fingerless gloves and a backpack that is in the shape of a vault.

If you really want to get your creative juices flowing, try your hand at creating a vault backpack prop using cardboard or foam.