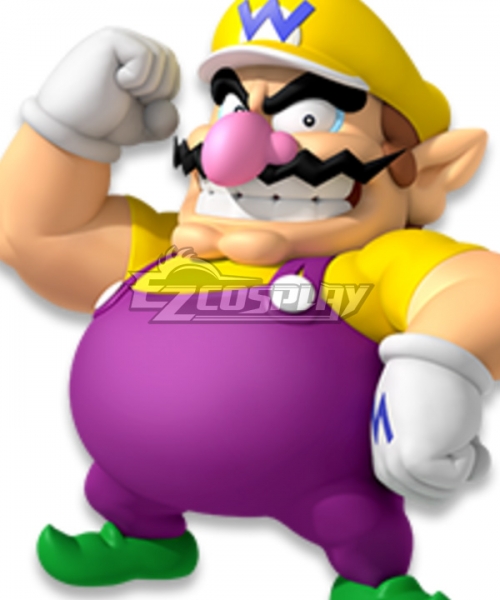 If you are looking for a wickedly fun costume for your next cosplay or Halloween party, slap on a crooked ‘stache with our Wario costume guide.

Wario is the villainous bizarro Mario of the Super Mario Bros. game franchise. Infamous as being greedy, morbidly obese, full of himself and short-tempered, this memorable character is not only extremely funny, but he’s also become a staple of childhood pop culture and gaming worldwide.

Although often appearing as an antagonist, Wario can be helpful at times, but typically he’s a hot-headed anti-hero who creates plenty of silly trouble for Mario and his friends.

Wario has light brown hair in sideburns near his ears. This hair is covered by a yellow and white policeman-like oversized cap with a large purple capital ‘W’ embroidered on the front, giving his first name initial.

You can dye and shave your own hair to get this look, or you can wear fake brown stick-on costume sideburns.

Get a yellow police-man style hat and embroider on a large W decal. You can also get a replica Wario hat at Amazon listed above.

Wario has angular dark black eyebrows in a thick, sinister-looking style over his eyes. He also has a dark, squiggly handlebar moustache to match, which sticks out from both ends of his oversized pink nose.

He has a flabby double chin and large teeth and when shouting or laughing, this gives him the appearance of a ventriloquist’s dummy.

You can get fake costume teeth, plastic nose coverings and fake facial hair online from joke shops, party supply stores and retail websites, or you can draw these exaggerated features on with Halloween face makeup.

Wario wears bright purple coveralls with large white fastener buttons, as well as a bright yellow t-shirt underneath these.

Get a white painter’s overalls and use some purple fabric dye to get the right color for Wario’s outfit.

Wario is paunchy – something he tries to make up for by bragging about his own strength. Use foam padding under your costume to recreate this appearance.

Wario wears bright emerald green fabric elf-style shoes on his feet with pointed toes. You can purchase green shoes from retail websites and shoe stores, or as a substitute you can use green slippers with pointy toes instead.

He also wears oversized white gloves on his hands with purple zig-zag accents on them to imply that his fists are clenched in the games he appears in.

Use a purple fabric marker or paint to add the zig-zag shape, or you can look to see if you can find any cartoon costume gloves in a similar style.