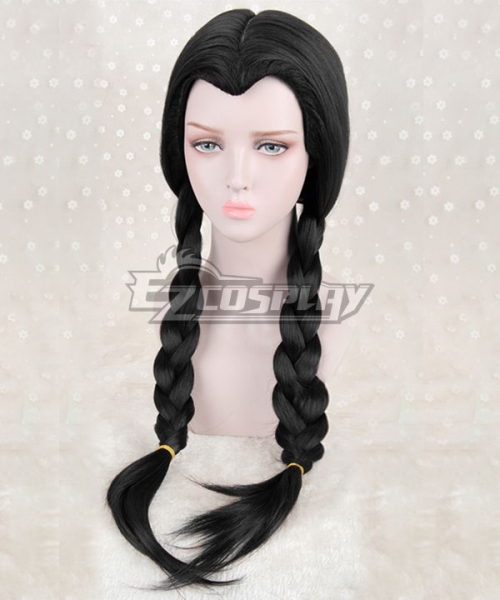 Wednesday, the youngest member of the Addams family, is at that very special age when a girl has only one thing on her mind. Homicide. This spooky girl is one of the most iconic members of the Addams Family and is a go-to costume for the Halloween season. In this guide, we will teach you how to dress like Wednesday for cosplay and Halloween.

She has very pale white skin, she wears her jet-black hair in pigtail braids, she wears a black long- sleeved dress with a white peter pan collar, black tights, and black combat boots.

She is often carrying around a giant weapon of some kind to use on her brother, a bottle of poison which she regularly drinks, or her little doll who is similarly dressed with its head cut off. She does not wear any makeup and she never smiles because she hates everything.

Now, listen up. Attention to detail is a primary quality she looks for in an accomplice.

See some of our top costume guides here. 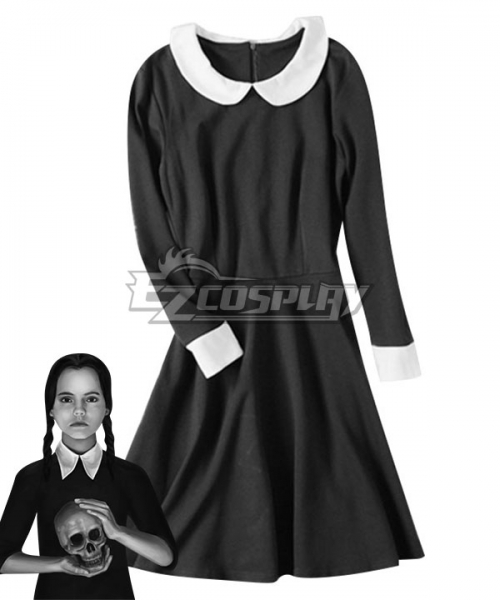 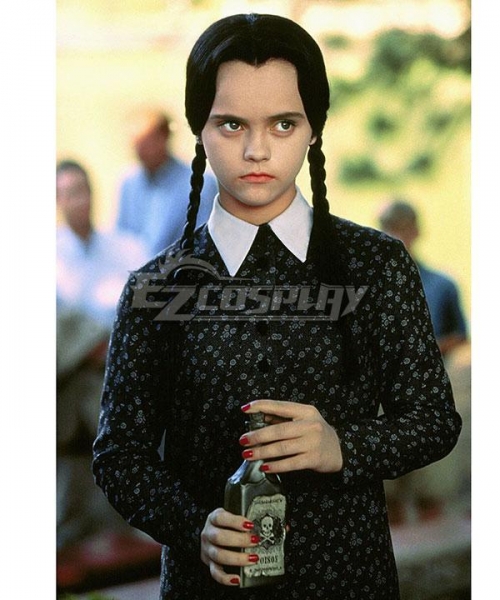 How to Dress Like Wednesday Addams from The Addams Family

Wednesday parts her long, straight, jet black hair down the center of her head and wears long plat-braided pigtails. She is a little girl after all. To replicate this look, just part and braid your hair accordingly if you already have long straight black hair.

If you have long hair, dye it black and part and braid it accordingly. If you don’t have long hair, you can get a long black wig online or at any costume shop. You can either buy it already braided, or plat-braid the wig yourself. She may look innocent, but she is almost always killing you in her mind.

Wednesday only wears black. In fact, she’ll stop wearing black when they come out with a darker color. Her dress is reminiscent of a much older time and is the kind of dress that a little girl would wear to a funeral. It is black, has long sleeves, and a white peter pan collar. You can find a dress like this online, at any major retailer, or at a costume shop.

Be afraid, be very afraid. Wednesday will scare you to death. She wears opaque black tights under her dress, and black combat boots, both of which you can get online or at any major retailer. She’s not shy, she’s contagious.

She also carries around a green early-1900s-style bottle of poison, which she drinks from regularly. She doesn’t really know if the poison is killing her or making her stronger, but she likes it. She also attempts to sell similar bottles of poison with her brother instead of making a lemonade stand.

The other prop that she is very known for is her headless doll that is sort of dressed like her. The doll’s name is Marie Antoinette, and she “fixed” her by removing her head.

Now, run along and play “Is there a God?” with your brother and the electric chair.