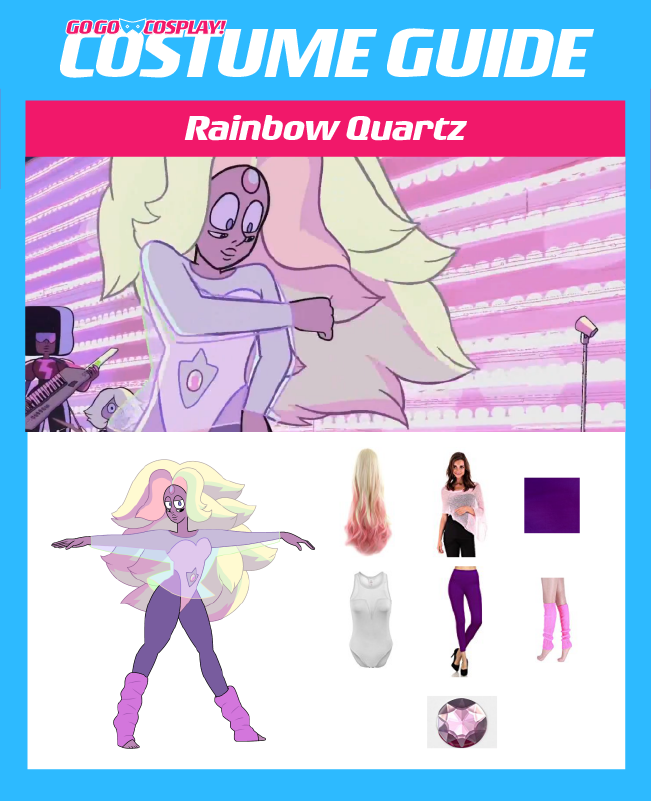 Rainbow Quartz was only featured in one episode of Steven Universe so far, “We Need to Talk”, but she’s one of the most memorable character to ever appear on the show. Rainbow Quartz is a fusion of crystal gems Rose Quartz and Pearl which occurred when Pearl convinced Rose to fuse with her during a VHS tape music video they helped make with Greg Universe. He’s just as shocked by Rainbow’s appearance as the rest of us! Unfortunately for him, Rainbow shoots him a malicious look afterwards, probably coming from Pearl, who isn’t exactly Greg’s biggest admirer.

Check out the links below to make your own DIY Rainbow Quartz costume for cosplay or halloween.

Rainbow Quartz has voluminous tri-colored hair which looks like a merge of Pearl and Rose’s hair. To get this look, either bleach your hair or use a light blonde wig, and add pink and purple hair extensions. Use a paddle brush and lots of hairspray for that extra teased volume look! Glitter hairspray works best if you want to get the same gemstone glow as Rainbow Quartz.

Rainbow has a small pink pearl on the center of her forehead, as well as two sets of eyes – a small darker indigo set under her larger eyes. To nail this creepy yet cool effect, you can use Halloween face paint to draw fake eyes beneath your own and use metallic pink makeup to draw a pearl on your head.

Rainbow’s skin tone is very pale. Use regular drugstore foundation to get this look, or skip it if you’re in a hurry.

violet leggings. There is an arrowhead-shaped cut-out on the leotard. She also wears a translucent long-sleeved,

turquoise blouse with green outlines over her body. She doesn’t wear shoes, but instead has long, dark pink leg warmers that cover her legs and feet. You can either buy these items in a store, or make them yourself using any kind of fabric you want.

Rainbow Quartz appears on the show during Greg’s VHS tape music video. For an extra touch to your costume, visit a thrift store and look for an old VHS tape to carry with you. VHS tapes went out of style years ago but it will add a nostalgic, retro element to your Halloween costume. Get your friends to dress up as the rest of the Steven Universe gang and you’ll stand out at any Halloween party or convention.

Isn’t it remarkable, Steven? This world is full of so many possibilities. Each living thing has an entirely unique experience. The sights they see, the sounds they hear. The lives they live are so complicated… and so simple. I can’t wait for you to join them.